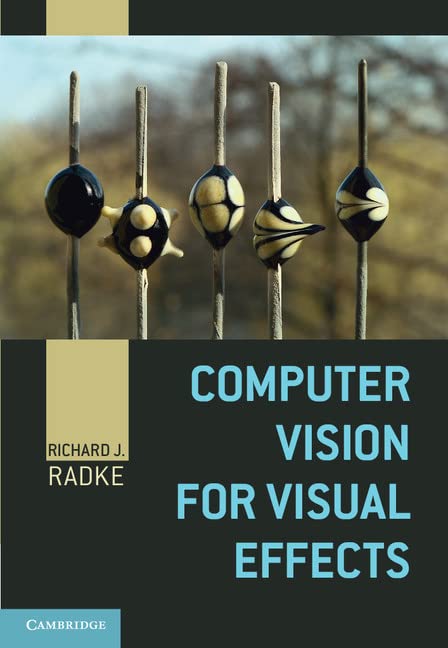 Out of Stock
$65.99
inc. GST
This book explores the fundamental computer vision principles and state-of-the-art algorithms used to create cutting-edge visual effects for movies and television.
Very Good
Only 0 left

Modern blockbuster movies seamlessly introduce impossible characters and action into real-world settings using digital visual effects. These effects are made possible by research from the field of computer vision, the study of how to automatically understand images. Computer Vision for Visual Effects will educate students, engineers and researchers about the fundamental computer vision principles and state-of-the-art algorithms used to create cutting-edge visual effects for movies and television. The author describes classical computer vision algorithms used on a regular basis in Hollywood (such as blue screen matting, structure from motion, optical flow and feature tracking) and exciting recent developments that form the basis for future effects (such as natural image matting, multi-image compositing, image retargeting and view synthesis). He also discusses the technologies behind motion capture and three-dimensional data acquisition. More than 200 original images demonstrating principles, algorithms and results, along with in-depth interviews with Hollywood visual effects artists, tie the mathematical concepts to real-world filmmaking.

"Hollywood's achievements in visual effects have been enabled not just by advances in computer graphics, but just as much by techniques from the neighboring field of computer vision. Vision techniques such as camera tracking, 3D reconstruction, and face and body motion capture contribute to most of the visual effects shots we see today. Rich Radke's book Computer Vision for Visual Effects begins with the basics and shows how math, geometry, image processing, and scene understanding comprise these tools that create the movies. Read it and you'll understand an important part of the magic that makes the films we love." Paul Debevec, Scientific and Engineering Academy Award Winner for Lightstage Work
"Richard Radke has produced a computer vision textbook like no other. The field of computer vision is vast and varied and many techniques apply to only a small number of applications. This book does something completely novel: not only does it provide a clear, current, and detailed examination and explanation of the latest computer vision techniques, it also shows how these techniques are used in the practice of visual effects. Including interviews with visual effects practitioners, this book answers the question, `That's a cool technique, but is it useful?' and it does it in a complete, well-written, and engaging way. Anyone thinking of applying computer vision techniques to visual effects problems (and more) should run to get a copy of this book." Doug Roble, Digital Domain
"The visual effects industry relies intimately on highly sophisticated computer vision algorithms and also provides one of the primary application areas for such algorithms. Richard Radke's comprehensive textbook on these subjects reviews hundreds of such algorithms with applications to topics such as image matting and compositing, feature tracking and matchmoving, motion capture, and 3D model acquisition. It will surely find a prominent place on both visual effect practitioners' and computer vision researchers' bookshelves." Richard Szeliski, Microsoft Research

Richard J. Radke is a Professor in the ECSE (Electrical, Computer, and Systems Engineering) department at Rensselaer Polytechnic Institute (RPI), where he researches topics in computer vision, the study of algorithms for automatically understanding images. After many years of teaching image processing courses, he became particularly interested in the computer vision algorithms behind Hollywood visual effects (VFX), which are the topic of his first book. While writing the book, he was able to visit several VFX companies in California and see lots of behind-the-scenes material from movies and TV. For more information, please visit his book blog, http://cvfxbook.com, and his professional page, http://www.ecse.rpi.edu/~rjradke/research.htm.

GOR010222830
Computer Vision for Visual Effects by Richard J. Radke (Rensselaer Polytechnic Institute, New York)
Richard J. Radke (Rensselaer Polytechnic Institute, New York)
Used - Very Good
Hardback
Cambridge University Press
2012-11-19
405
0521766877
9780521766876
N/A
Book picture is for illustrative purposes only, actual binding, cover or edition may vary.
This is a used book - there is no escaping the fact it has been read by someone else and it will show signs of wear and previous use. Overall we expect it to be in very good condition, but if you are not entirely satisfied please get in touch with us.