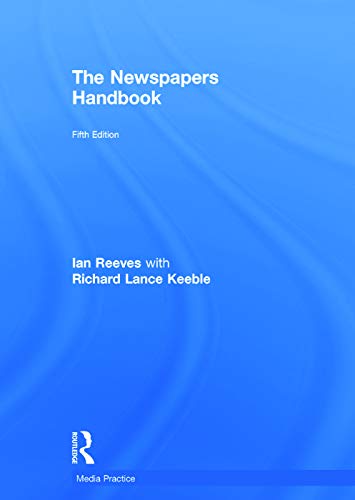 The Newspapers Handbook
by Richard Keeble

The Newspapers Handbook by Richard Keeble

This new edition of The Newspapers Handbook presents an enlightening examination of an ever-evolving industry, engaging with key contemporary issues, including reporting in the digital age and ethical and legislative issues following the hacking scandal to display a comprehensive anatomy of the modern newsroom.

Other key areas explored include:

'something quite unique in its attempt to untie theroy and practice within a single volume... Keeble is doing to journalism what John Berger did to art appreciation with the aim here of developing the reflective journalist in a global world... The Newspapers Handbook will remain the definitive work because of the range, quality and depth of its content.' - Rob Melville, Journalism Practice

Ian Reeves is Deputy Director of the University of Kent's Centre for Journalism. An award-winning former editor of Press Gazette, he continues to write about business and media issues for a variety of newspapers and to provide digital consultancy for online news content. He is co-editor of What Do We Mean By Local? Grass-Roots Journalism - Its Death and Rebirth (with Neil Fowler and John Mair, 2012). He designed and built the Centre for Journalism's website and its iPad app - the first app for a university department to appear on the Apple App Store. Richard Lance Keeble is Professor of Journalism at the University of Lincoln. He is the author of Ethics for Journalists (2nd edition, 2008), the editor of Print Journalism: A Critical Introduction (2005), the co-editor of The Journalistic Imagination: Literary Journalists from Defoe to Capote and Carter (with Sharon Wheeler, 2007) and is co-editor and author of 25 other titles.

Notes on contributors Preface 1. From Grub Street to pub tweet: Anatomy of an industry 2. From print to multi-platform: Anatomy of a newspaper 3. Press gangs and endangered species: Anatomy of the modern newsroom 4. Journalism in the dock: Ethics, Hackgate and beyond 5. Standing the story up: Reporting basics 6. Learning the language of news 7. News reporting in the digital age 8. Feature writing: Painting pictures in words 9. The art of interviewing 10. Investigative reporting: The good, the bad and the ugly Nick Nuttall 11. The wrong arm of the law: Newspapers and legislation 12. Powerful information: Reporting national and local government John Turner 13. All human life: Covering the courts Mark Hanna 14. On or off the job - or both? Training and careers Appendix: useful information and contacts Bibliography Index

GOR010178501
The Newspapers Handbook by Richard Keeble
Richard Keeble
Media Practice
Used - Very Good
Hardback
Taylor & Francis Ltd
2014-08-27
336
0415666511
9780415666510
N/A
Book picture is for illustrative purposes only, actual binding, cover or edition may vary.
This is a used book - there is no escaping the fact it has been read by someone else and it will show signs of wear and previous use. Overall we expect it to be in very good condition, but if you are not entirely satisfied please get in touch with us.