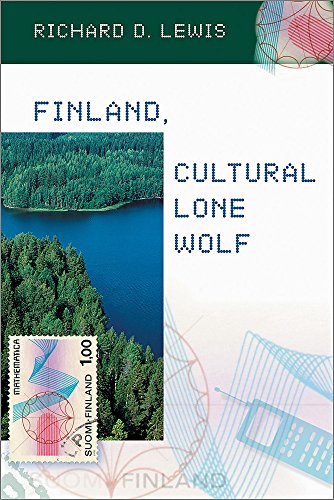 Used Price
$25.99
inc. GST
Free Shipping in Australia
A communications trainer based in Finland for 50 years, Lewis traces how the Finnish people transformed their war-torn country with a struggling economy in 1945, into a leader in technology and major diplomatic player in Europe by the end of the century. He attributes their achievements to the culture rather than to political or business prowess. A
Reviews:
Trustpilot
Very Good Good

Finland, Cultural Lone Wolf is the story of an accomplished nation and her extraordinary people. Pursuing a "Lone Wolf" policy, Finland raised itself from a struggling, war-battered state in 1945 to one of the most developed countries in the world.

The exponential rise of Nokia from tire and timbers to leading the world's telecommunication industry is indicative of the Finns and their characteristic business style. These remarkable people speak a language unique in its origins and have kept their cultural identity intact despite the influences of powerful neighbors, Sweden and Russia.

Uniquely qualified to write about Finalnd, best-selling author Richard Lewis traces the fascinating Finnish origins, as well as her history, geography, values and culture. His extensive experience with Finnish business provides him with keen insight on leadership style, negotiation strategies and the uniquely Finnish suomi-kuva (Finland image). And Lewis shines when describing Finnish humor, complete with hilarious jokes and stories. Finland, Cultural Lone Wolf shows a nation and a writer at their best.

Lewis attributes Finnish achievements in the last century to the culture rather than to political or business prowess. -- Nancy J. Adler, Ph.D., McGill University, Montreal, Canada * Reference & Research Book News *
Richard Lewis brings his extensive knowledge of Finland to a wide audience, capturing the mystery and setting the context for its continued success. Finland, Cultural Lone Wolf is a book of many insights-about Finland and the world beyond. * Matthew Kirk, British Ambassador to Finland *

Richard Lewis is the chairman of Richard Lewis Communications, an international institute of cross-cultural and language training with offices in over 30 countries. He founded the quartely magazine Cross Culture and is heavily involved in the intercultural field, lecturing in countries from Finland to Hong Kong and working with companies as diverse as Fiat, IBM, Nokia, Andersen Consulting and Nestle. He lives near Winchester, and is one of Britain's foremost linguists, speaking 12 languages - and spent 5 years in Japan, where he was tutor to the Imperial Family.

GOR002032669
Finland, Cultural Lone Wolf by Richard Lewis
Richard Lewis
Used - Very Good
Paperback
John Murray Press
2004-11-25
224
193193018X
9781931930185
N/A
Book picture is for illustrative purposes only, actual binding, cover or edition may vary.
This is a used book - there is no escaping the fact it has been read by someone else and it will show signs of wear and previous use. Overall we expect it to be in very good condition, but if you are not entirely satisfied please get in touch with us.