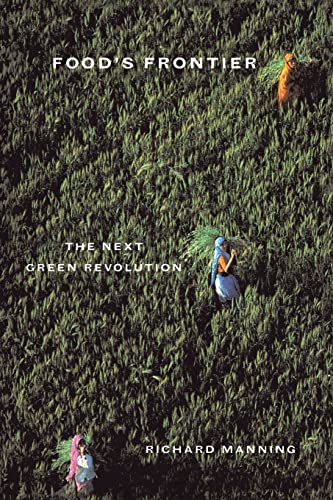 Used Price
$43.99
inc. GST
Free Shipping in Australia
Provides a survey of agricultural research projects underway in Ethiopia, Zimbabwe, Uganda, India, China, Chile, Brazil, Mexico, and Peru. This book starts from the premise that the 'Green Revolution' which averted mass starvation a generation ago is not a long-term solution to global food needs and has created its own very serious problems.
Reviews:
Trustpilot
Very Good

Food's Frontier: The Next Green Revolution by Richard Manning

"Food's Frontier" provides a survey of pioneering agricultural research projects underway in Ethiopia, Zimbabwe, Uganda, India, China, Chile, Brazil, Mexico, and Peru by a writer both well-grounded technically and sensitive to social and cultural issues. The book starts from the premise that the 'Green Revolution' which averted mass starvation a generation ago is not a long-term solution to global food needs and has created its own very serious problems. Based on increasing yields by extensive use of pesticides, chemical fertilizers, and monoculture - agribusiness-style production of single crops - this approach has poisoned both land and farm workers, encouraged new strains of pests that are resistant to ever-increasing amounts of pesticides, and killed the fertility of land by growing single crops rather than rotating crops that can replenish nutrients in the soil. Solutions to these problems are coming from a reexamination of ancient methods of agriculture that have allowed small-scale productivity over many generations. Research in the developing world, based on alternative methods and philosophies, indigenous knowledge, and native crops, joined with cutting edge technology, offer hope for a more lasting solution to the world's increasing food needs.

"Manning traveled to developing nations and investigated research projects...from a sweet potato pest study in Uganda to a multi-crop system of farming in Mexico, focused on native crops and applying modern science to traditional wisdom. Input from scientists, civil servants, and farmers yielded innovative interdisciplinary solutions to today's problems." - Dean Neprud, Minneapolis Star-Tribune "With the Green Revolution unmasked as chemical overkill, finding a way of feeding the billions in 2020 is one of the biggest challenges we face. Richard Manning has a go at unpicking the complexities of the job in his admirable Food's Frontier." - The New Scientist "Food's Frontier sets a new intellectual standard for placing genomics, biotechnology, and food security into the lives of ordinary people. Richard Manning takes the reader on a worldwide tour of agriculture, displaying both its science-rich and resource-poor systems. His volume combines complex scientific principles with a remarkably accessible style. Above all, Manning demonstrates the shortage of human capital in poor countries and the need for much greater support for Third World scientists." - Paul Ehrlich, author of Human Natures "Manning hopscotches through Africa, Asia, and South America to provide detailed reports on nine agricultural research projects. The resulting travelogue is thoughtful, provocative, and bursting with complexities and contradictions." - Karen Cook, Voice Literary Supplement

Richard Manning is an environmental journalist and author. Among his books are Grassland: The History, Biology, Politics and Promise of the American Prairie (1995), A Good House: Building a Life on the Land (1994), and Last Stand: Logging, Journalism, and the Case for Humility (1991). His reporting has received the Audubon Society Journalism Award, the R. J. Margolis award, and three C. B. Blethen awards.

The Seed
The Case for a Second Green Revolution

To Work in Peace
Visionaries in Violent Times
(Uganda]

The Critical Mass
The fate of farming in an Industrializing World
[Nanjing, China]

Forging a Magic Bullet
Technology Based in Biodiversity
[Chile and Brazil]

The Genie in the Genome
Bioengineering in Context

A Common Ground
Food, Cities, and the Integrity of Rural Life

GOR009788715
Food's Frontier: The Next Green Revolution by Richard Manning
Richard Manning
Used - Very Good
Paperback
University of California Press
2001-10-05
238
0520232631
9780520232631
N/A
Book picture is for illustrative purposes only, actual binding, cover or edition may vary.
This is a used book - there is no escaping the fact it has been read by someone else and it will show signs of wear and previous use. Overall we expect it to be in very good condition, but if you are not entirely satisfied please get in touch with us.