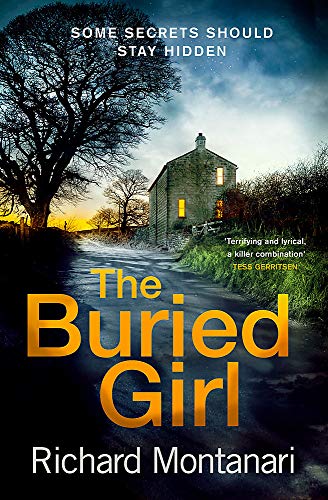 The Buried Girl
by Richard Montanari

The Buried Girl: The most chilling psychological thriller you'll read all year by Richard Montanari

'Glittering and sharp, an ice pick of a novel. An astounding talent'
AJ Finn, author of The Woman in the Window

When New York psychologist Will Hardy's wife is killed, he and his teenage daughter Bernadette move into Godwin Hall, a dusty, shut-up mansion in the small town of Abbeville, Ohio.

Meanwhile, Abbeville Chief of Police Ivy Holgrave is investigating the death of a local girl, convinced this may only be the latest in a long line of murders dating back decades - including her own long-missing sister.

But what place does Will's new home have in the story of the missing girls? And what links the killings to the diary of a young woman written over a century earlier?

'The author's elegiac tone takes the curse off this blood-drenched thriller . . . Gripping'
New York Times (the 10 best crime novels of 2016)

'Taut, propulsive and darkly gripping, Montanari is a master of suspense'
Chris Ewan

***** 'One of the best detective stories I have ever read'

***** 'Every once and while I read a classic which I'll NEVER forget.This is a book I'll never forget'

***** 'From start to finish, you never want to stop! You have to know what happened!'

***** 'Richard Montanari never lets you down. The ending is always a surprise'

Richard Montanari's elegiac tone takes the curse off Shutter Man, a blood-drenched thriller about a group of imperfectly domesticated boys who came from the same blighted neighborhood and grew up to become criminals and killers - and cops . . . Gripping * New York Times *
Glittering and sharp, an ice pick of a novel. Richard Montanari ranks among my favorite thriller writers. He devises plots to set your blood sizzling, peoples them with charismatic heroes and villains, and tops it all off with prose as lush and stylish as any you'll find. An astounding talent * AJ Finn *
An ambitious and memorable thriller * Booklist *
The plot twists and narrative conjuring tricks continued to the penultimate page . . . extra icing on what was already a very enjoyable and well-made cake * Crime Fiction Lover *
Exceptional . . . an engrossing story * Publishers Weekly *
The Buried Girl works on more than one level - the Father/Daughter relationship is beautifully done. Then we have a creepy, intense mystery element that is unpredictable and fascinating with a rich history and mythology that is utterly gripping . . . Absolutely excellent. One of my favourite thriller writers working today * Liz Loves Books (blog) *
Richard Montanari's The Buried Girl will hook readers on page one and never let them go. The complicated story resonates long after the last page is turned * Auntie M Writes (blog) *
Truly terrifying * Woman's Way *
A cracking good read * Promoting Crime Fiction *
The Buried Girl was such a creepy story... and a damn good one! * The Misstery (blog) *
The Buried Girl is a perfect read for any psychological thriller reader with a cast of characters you can invest your time in. There is intensity, history, cleverness and gore to witness here and a compelling story of family and retribution to enjoy * Always Trust in Books (blog) *
I devoured it-all the time regretting the pace of my reading-because it brought me to the end all too soon * Shelf Indulgence (blog) *
A haunting, nerve-jangling psychological thriller * Read & Review (blog) *

Richard Montanari was born in Cleveland, Ohio, to a traditional Italian-American family. After university, he travelled extensively in Europe and lived in London.

Returning to the US, he started working as a freelance writer for The Chicago Tribune, The Detroit Free Press, The Seattle Times, and many others. He wrote his first book, Deviant Way, in 1996 and it won the OLMA for Best First Mystery. His novel Shutter Man was named a New York Times Crime Novel of the Year for 2016, and his books have now been published in more than twenty-five languages.

GOR010100026
The Buried Girl: The most chilling psychological thriller you'll read all year by Richard Montanari
Richard Montanari
Used - Very Good
Paperback
Little, Brown Book Group
2019-02-12
464
0751563862
9780751563863
N/A
Book picture is for illustrative purposes only, actual binding, cover or edition may vary.
This is a used book - there is no escaping the fact it has been read by someone else and it will show signs of wear and previous use. Overall we expect it to be in very good condition, but if you are not entirely satisfied please get in touch with us.