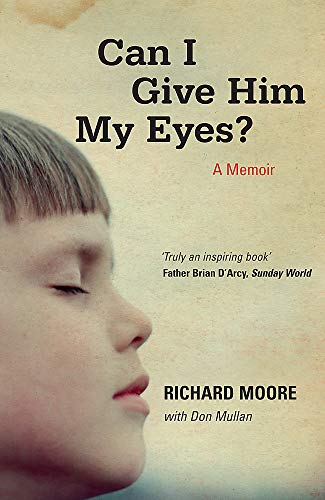 Can I Give Him My Eyes?
by Richard Moore

In Stock
$16.99
+10% GST
'I encourage people across the world to read what Richard has to say.' His Holiness the Dalia Lama
Very Good Good Well Read
7 in stock

Can I Give Him My Eyes? Summary

Can I Give Him My Eyes? by Richard Moore

'I was about 10 feet away when a soldier fired the rubber bullet that struck me on the bridge of my nose. I didn't hear the bang of the discharge. All I remember is that everything went blank. And that was the moment my life changed forever.'

Richard Moore was ten years old when he was shot by a British soldier, on his journey past an army base on his way home from school. 'Can I Give Him My Eyes? was the question Richard's father asked the doctors when they broke the news that they could not save his sight.

Here Richard Moore lends us his eyes as he shares his remarkable story, from his early years growing up on the Catholic working-class Creggan Estate in Derry, the second youngest of a family of twelve children. In it he describes the moment of grace that accompanied the realisation that he would never again see, where he accepted his fate instantly and without bitterness, and tells of wonderful childhood escapades, including 'endless cycles down Malin Gardens' guided by the voices of his friends.

Years later, in an extraordinary turn of events, Richard met and befriended the man who shot him. Can I Give Him My Eyes? is an inspiring life story of a singular man, and founder of the charity Children of Crossfire, whom the Dali Lama describes as 'not only my friend but my hero'.

Can I Give Him My Eyes? Reviews

Richard Moore was born in Derry in 1962. At the age of 10 he was blinded after being shot by a British soldier by a rubber bullet. He went on to live an astounding life - father, musician, businessman, peace and reconciliation worker. In 1996 he founded the charity 'Children in Crossfire', which aims to 'make a lasting and significant contribution towards the eradication of poverty' and which helps children all over the world. Richard lives in Northern Ireland with his wife and two daughters.

GOR001988587
Can I Give Him My Eyes? by Richard Moore
Richard Moore
Used - Very Good
Paperback
Hachette Books Ireland
2010-01-07
288
0340918667
9780340918661
N/A
Book picture is for illustrative purposes only, actual binding, cover or edition may vary.
This is a used book - there is no escaping the fact it has been read by someone else and it will show signs of wear and previous use. Overall we expect it to be in very good condition, but if you are not entirely satisfied please get in touch with us.