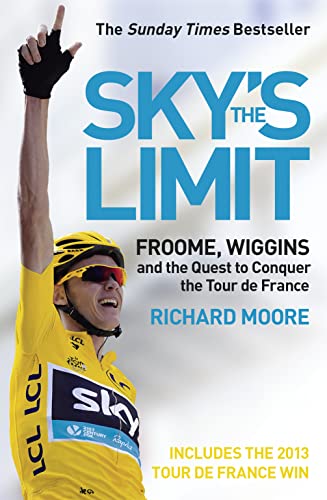 Sky's the Limit by Richard Moore

On Sunday 22 July, Bradley Wiggins became the first British rider ever to win the Tour de France. It was the culmination of years of hard work and dedication and a vision begun with the creation of Team Sky. This is the inside story of that journey to greatness.

Sky's the Limit: Froome, Wiggins and the Quest to Conquer the Tour de France by Richard Moore

On Sunday 22 July, Bradley Wiggins became the first British rider ever to win the Tour de France. It was the culmination of years of hard work and dedication and a vision begun with the creation of Team Sky. This is the inside story of that journey to greatness.

Brailsford is the mastermind behind the phenomenal success of the British track cycling team which dominated the Beijing Olympics in 2008, winning seven gold medals. But road cycling is a very different ball game. It has the lion's share of the sport's history and legends; it has the bulk of the fans, television and media interest; and it has, far and away, the biggest pot of money.

It is a sport that is rooted in mainland Europe - a land that is, in so many literal, metaphorical and cultural ways, foreign to Great Britain. British victories in the Tour can be counted on the fingers of a mitten. The closest anyone has ever come is Robert Millar and Bradley Wiggins, who were fourth in 1984 and 2009 respectively, but no Briton has seriously challenged for the maillot jaune - the yellow jersey of overall winner.

Sky's the Limit follows the gestation and birth of a brand new road racing team, which is the first British team to compete in the Tour de France since 1987. Team Sky, as it is known, since it is to be backed by the satellite broadcaster Sky, set out on the road to Tour de France glory in January 2010.

With exclusive behind-the-scenes access and interviews, Sky's the Limit will follow the management and riders as they embark on their journey - witnessing their first training camp and team presentation in December 2009, their debut at the Tour Down Under in January 2010, and their debut at the Tour de France in July 2010 - and as they then set out to write their 'epic story'.

'This is an absolutely must-read book...Moore has cleverly used the very cogent words of others to paint a picture of real characters within a new order' Graeme Obree, Scotsman

'Like its hero, this book is the real McHoy.' Scotland on Sunday

'An excellent book'. The Sunday Times

'...an inspiring tale. And in Richard Moore it has a splendid chronicler.' Independent on Sunday

Richard Moore is a freelance journalist who has written on sport, art and literature, contributing to the Scotsman, Scotland on Sunday, Herald, Guardian and Sunday Times. He was a member of the Scotland team in the Prutour, the nine-day cycling tour of Britain, and represented Scotland in the 1998 Commonwealth Games. His first book for HarperSport, In Search of Robert Millar, won Best Biography at the 2007 British Sports Book Awards. His Heroes, Villains and Velodromes was a bestseller for HarperSport in 2008, and in 2009 he ghosted Chris Hoy's autobiography.

GOR005494242
Sky's the Limit: Froome, Wiggins and the Quest to Conquer the Tour de France by Richard Moore
Richard Moore
Used - Very Good
Paperback
HarperCollins Publishers
2013-09-12
384
0007549938
9780007549931
N/A
Book picture is for illustrative purposes only, actual binding, cover or edition may vary.
This is a used book - there is no escaping the fact it has been read by someone else and it will show signs of wear and previous use. Overall we expect it to be in very good condition, but if you are not entirely satisfied please get in touch with us
Trustpilot