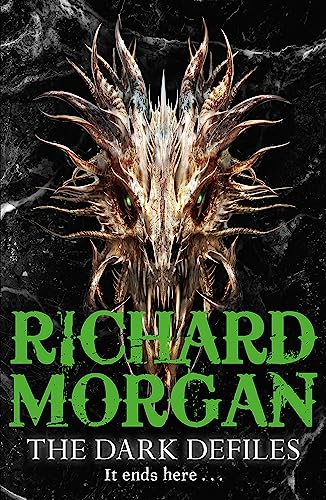 The Dark Defiles
by Richard Morgan

The Dark Defiles by Richard Morgan

Compared to Michael Moorcock and Joe Abercrombie alike, Richard Morgan's fast moving and brutal science fantasy reaches its final volume as Ringil comes to his final reckoning and sees the world tipping into another war with the dragon folk. And, most terrifying of all, the prophecy of a dark lord come to rule may be coming true very close to home...

THE DARK DEFILES is a supremely fast moving 240,000 word epic. A massive yet tight story that both shines a light on some mysteries from earlier volumes and reveals deeper mysteries yet. We encounter the artifacts of an ancient race, learn the true story of the ghostly Dwenda and follow three old friends as they face their greatest test yet.

The Dark Defiles is best of the series. Morgan built a fascinating world, dirt and all, and populated it will heroes that were also real people. Morgan dissects the idea of hero and looks at it from every angle. Our three protagonists aren't anti-heroes they are just flawed. While they deal with their flaws they realize that in the end heroes don't get to live happily ever after. * Buzzy Mag *

GOR007099063
The Dark Defiles by Richard Morgan
Richard Morgan
Gollancz S.F.
Used - Very Good
Paperback
Orion Publishing Co
2015-09-08
560
0575088605
9780575088603
N/A
Book picture is for illustrative purposes only, actual binding, cover or edition may vary.
This is a used book - there is no escaping the fact it has been read by someone else and it will show signs of wear and previous use. Overall we expect it to be in very good condition, but if you are not entirely satisfied please get in touch with us.