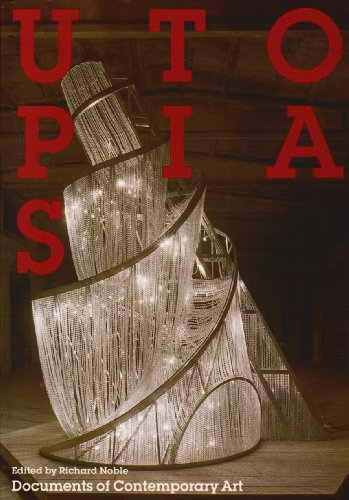 In Stock
$35.99
inc. GST
This anthology contextualizes art's current engagement with the utopian in relation to political thought, viewing the utopian as a key term in the artistic lineage of modernity.
Very Good
Only 1 left

Part of the acclaimed 'Documents of Contemporary Art' series of anthologies .

Utopian projects aspire to a better world but their forms may only ever live in our imaginations. Furthermore, we are as haunted by their failures as we are inspired by the aspiration to repair the failed and build the new. This anthology contextualizes art's current engagement with the utopian in relation to political thought, viewing the utopian as a key term in the artistic lineage of modernity. It illuminates how the exploration of utopian themes in art today contributes to our understanding of contemporary cultures and the possibilities for shaping their futures.

"Richard Noble has brilliantly brought together a selection of writings by artists, political theorists, critics and philosophers in order to investigate the utopian in contemporary art and culture - how art explores the impulse towards a better world, as well as how it plays out the intimation of a dystopian and dark universe so near to us. From canonical historical texts such as More's Utopia of 1516 and Marx and Engels' writings in the nineteenth century, to Orwell's 1949 dark vision of utopia gone sour in Nineteen Eighty-Four; from Adorno's avant-garde negativity to Debord and Constant's views of the total integration of art and political revolution in the 1950s and 1960s; from Beuys' view of a practical and realizable utopia of the 1970s, up to Pierre Huyghe, Hans Ulrich Obrist, and Philippe Parreno's views of relational communities and conviviality at the turn of this new century; this collection of essays and interviews provides insight and challenges us to imagine the twenty-first century with absolute freedom." - Carolyn Christov-Bakargiev, Chief Curator, Castello di Rivoli, Turin; Artistic Director, Documenta 13 "This is an exceptionally stimulating book, helping explain why Utopia continues to mean 'Nowhere.'" - Arthur C. Danto, Johnsonian Professor Emeritus of Philosophy, Columbia University, and art critic, The Nation

Richard Noble is by training a political philosopher who has migrated into the field of art. Much of his writing and teaching focuses on the relation between art and politics. Head of the Department of Art at Goldsmiths College, London, he is currently writing an introduction to art theory and has published catalogue essays on contemporary artists including Antony Gormley, Mona Hatoum and Rachel Whiteread.

GOR007537204
Utopias by Richard Noble
Richard Noble
Documents of Contemporary Art
Used - Very Good
Paperback
Whitechapel Gallery
2009-09-04
240
085488162X
9780854881628
N/A
Book picture is for illustrative purposes only, actual binding, cover or edition may vary.
This is a used book - there is no escaping the fact it has been read by someone else and it will show signs of wear and previous use. Overall we expect it to be in very good condition, but if you are not entirely satisfied please get in touch with us.