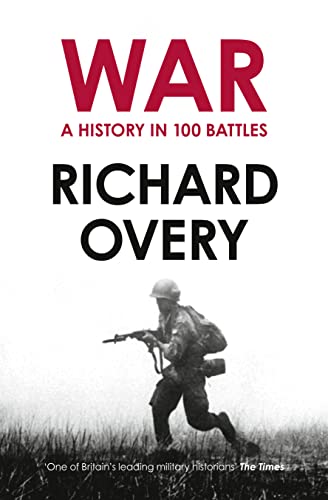 The object of this book is to introduce readers to a whole range of military history which has all the drama, dangers, horrors and excitement that we associate with Stalingrad or the Somme. Battles are acute moments of history whenever and wherever they have been fought. Through them we can understand how warfare and world history have evolved.

War: A History in 100 Battles by Richard Overy

The object of this book is to introduce readers to a whole range of military history which has all the drama, dangers, horrors and excitement that we associate with Stalingrad or the Somme. Battles are acute moments of history whenever and wherever they have been fought. Through them we can understand how warfare and world history have evolved.

Choosing just one hundred battles from recorded human history is a challenge. Not just because it is necessary to cover almost 6,000 years of history, but because men have fought each other almost continuously for millennia. Anyone who knows anything about the history of war may be disappointed at what has had to be left out. However, each of the 100 memorable battles described shows both how the nature of armed combat has changed over human history, and also how, despite changes in technology, organisation or ideas, many things have remained the same.

It is an old adage that you can win a battle but lose a war. The battles featured here almost always resulted in victory for one side or another, but the victor did not necessarily win the war. Some battles are decisive in that broader historical sense, others are not. The further back in time, the more likely it is that an enemy could be finished off in one blow. The wars of the modern age, between major states, have involved repeated battles until one side was battered into submission. Some of the great generals of the recent past - Napoleon, Robert E Lee, Erich von Manstein - have been on the losing side but are remembered nonetheless for their generalship.

Some on the winning side have all but disappeared from the history books or from public memory. Equally, in many battles, the issue is not victory or defeat, but what the battle can tell us about the history of warfare itself. New weapons, new tactics, new ways of organising armed forces can have a sudden impact on the outcome of a battle. But so too can leadership, or the effects of a clever deception, or raw courage. That is why the book has been divided up into clear themes which apply equally to the battles of the ancient world as they do to the battles of today.

As Professor Richard Overy laments: "Battle is not a game to plug into a computer but a piece of living history, messy, bloody and real. That, at least, has not changed in 6,000 years."

Praise for `The Times Complete History of the World':

`One of the great works of historical reference in the English language. If you were allowed only one history book in the whole of your life, The Times Complete History of the World would be hard to beat because it conveys a sense not only of time, but also of place' Niall Ferguson, Professor of History, Harvard University.

Professor Richard Overy was educated at Caius College, Cambridge. He taught at Cambridge from 1972 to 1979 at Queens' College and from 1976-79 as a University Assistant Lecturer. From 1980 to 2004 he taught at King's College, London where he was made professor of Modern History in 1994. He is a Fellow of the Royal Historical Society (1977), Fellow of the British Academy (2000) and Fellow of King's College (2003). In 2001 he was awarded the Samuel Eliot Morison Prize of the Society for Military History for his contribution to the history of warfare. In September 2004 he took up appointment as Professor of History at the University of Exeter. He has published over twenty books on the genre, and is the editor of the bestselling The Times Complete History of the World.

GOR008800954
War: A History in 100 Battles by Richard Overy
Richard Overy
Used - Very Good
Paperback
HarperCollins Publishers
2016-10-06
416
0007452519
9780007452514
N/A
Book picture is for illustrative purposes only, actual binding, cover or edition may vary.
This is a used book - there is no escaping the fact it has been read by someone else and it will show signs of wear and previous use. Overall we expect it to be in very good condition, but if you are not entirely satisfied please get in touch with us.