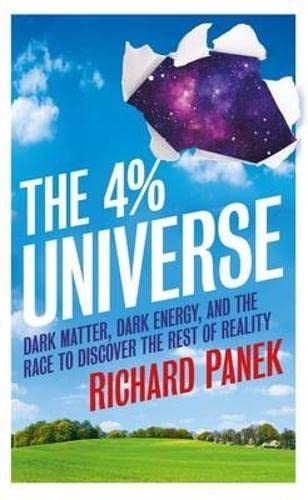 The 4-Percent Universe
by Richard Panek

Meet the players in the most fundamental scientific revolution since Copernicus

The 4-Percent Universe: Dark Matter, Dark Energy, and the Race to Discover the Rest of Reality by Richard Panek

It is one of the most disturbing aspects of our universe: only four per cent of it consists of the matter that makes up every star, planet, and every book. The rest is completely unknown. Acclaimed science writer Richard Panek tells the story of the handful of scientists who have spent the past few decades on a quest to unlock the secrets of "dark matter" and the even stranger substance called "dark energy". These are perhaps the greatest mysteries in science,and solving them will reshape our understanding of the universe and our place in it.
The stakes could not be higher. Panek's fast-paced narrative, filled with original, in-depth reporting and intimate, behind-the-scenes details, brings this epic story to life for the very first time.

"A superior account of how astronomers discovered that they knew almost nothing about 96 percent of the universe.... Panek delivers vivid sketches of scientists, lucid explanations of their work and revealing descriptions of the often stormy rivalry that led to this scientific revolution." Starred review. * Kirkus Reviews *
"[A] fascinating tale of cosmology's known unknowns." * BBC Focus *
"Impeccably researched and highly readable." * New Scientist *
"Panek provides a behind-the-scenes glimpse of science in the raw as alliances are forged and friendships strained. There is a new universe to explore..." * The Times *
"The 4% Universe is a compelling narrative of science at its best... An illuminating guide to the dark mysteries lying at the heart of the intersection of astronomy and fundamental physics." * The Wall Street Journal *
"Fascinating... Panek's passion for the mysteries of dark matter and dark energy wins the day." * Washington Post *
"Richard Panek delights us with [a] mesmerizing tale.... This book has it all; the excitement of great fiction - only it's true." * Philadelphia Enquirer *
"A compelling narrative of a quest full of technological challenges, unexpected turns and expected human rivalries over high stakes." * Dallas Morning News *
"Lively... [Panek] Is a wondrously clear explicator." * Salon *
"A rich portrait of modern scientific life." * The Guardian *
"Easily digestible, fast-paced... To the connoisseur of popular science, indeed, the way author Richard Panek tells the tale is as interesting as the events: half drama, half detective story." * Physics World *
"Reads... like an adventure novel.... Panek has craftily combined his lucid and accessible descriptions of science with thepersonal, often intimate story of those unlocking the finer details of the Universe." * BBC Sky at Night *
"Richard Panek's new book shows that the story of how discoveries are made is just as exciting as the discoveries themselves.... [The 4% Universe] inspires and awes in equal measure." * Astronomy Now *

GOR003299269
The 4-Percent Universe: Dark Matter, Dark Energy, and the Race to Discover the Rest of Reality by Richard Panek
Richard Panek
Used - Very Good
Paperback
Oneworld Publications
2011-02-01
320
1851688218
9781851688210
Long-listed for Royal Society Winton Prize for Science Books 2012 (UK)
Book picture is for illustrative purposes only, actual binding, cover or edition may vary.
This is a used book - there is no escaping the fact it has been read by someone else and it will show signs of wear and previous use. Overall we expect it to be in very good condition, but if you are not entirely satisfied please get in touch with us.