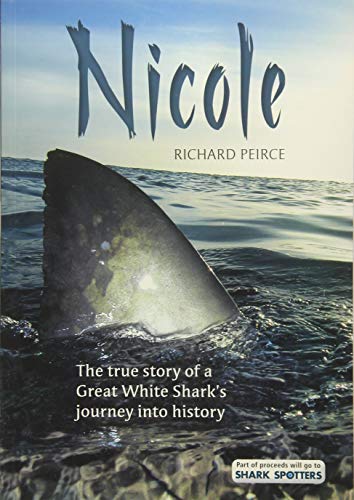 Used Price
$21.99
inc. GST
Free Shipping in Australia
In 2004 a Great White Shark crossed the Indian Ocean twice. Her story - a mix of actual events and conjecture - will promote awareness of the plight of sharks.
Reviews:
Trustpilot
Very Good

Nicole: The True Story of a Great White Shark's Journey into History by Richard Peirce

Sharks are among the most persecuted animals on Earth. Nicole's blockbuster story lifts the lid on the shocking details of the trade in shark fins, and raises awareness of the plight of sharks in the 21st century.

In November 2003 a female Great White Shark was tagged near Dyer Island in South Africa. Her tag popped up in February 2004, just south of Western Australia. The shark, later to be named Nicole (after shark enthusiast Nicole Kidman), had swum an epic 11,000 km. Scientists were even more surprised when she was identified back in South Africa in August 2004 - she had covered 22,000 km in less than nine months, using pinpoint navigation both ways.

Since then, many Great Whites have been tagged and have shown a propensity for undertaking long migrations - but none has yet matched Nicole's amazing feat. This story incorporates a blend of science, actual events and real people, along with conjecture as to what might have happened on Nicole's momentous journey.

Richard Peirce is best known as a shark conservationist - his main focus for over 20 years. Chairman of the Shark Conservation Society and the Shark Trust, he has authored several books on the topic. Richard and his wife Jacqui are confirmed nomads who spend half the year inSouth Africa; their love of wildlife takes them to the bush at every opportunity.

GOR009692012
Nicole: The True Story of a Great White Shark's Journey into History by Richard Peirce
Richard Peirce
Used - Very Good
Paperback
Struik Publishers (Pty) Ltd
2017-03-01
200
1775845346
9781775845348
N/A
Book picture is for illustrative purposes only, actual binding, cover or edition may vary.
This is a used book - there is no escaping the fact it has been read by someone else and it will show signs of wear and previous use. Overall we expect it to be in very good condition, but if you are not entirely satisfied please get in touch with us.