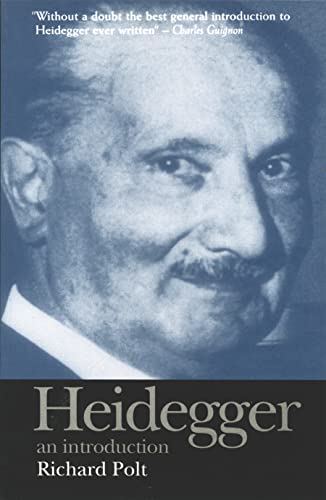 Richard Polt provides a lively and accessible introduction to one of the most influential and intellectually demanding philosophers of the modern era. Covering the entire range of Heidegger's thought, Polt skillfully communicates the essence of the...

Heidegger: An Introduction by Richard Polt

Richard Polt provides a lively and accessible introduction to one of the most influential and intellectually demanding philosophers of the modern era. Covering the entire range of Heidegger's thought, Polt skillfully communicates the essence of the philosopher, enabling readers, especially those new to his writings, to approach his works with confidence and insight. Polt presents the questions Heidegger grappled with and the positions he adopted, and also analyzes persistent points of difference between competing schools of interpretation.

The book begins by exploring Heidegger's central concern, the question of Being, and his way of doing philosophy. After considering his environment, personality, and early thought, it carefully takes readers through his best-known work, Being and Time. Heidegger concludes with highlights of its subject's later thought, providing guidelines for understanding Contributions to Philosophy and other important texts. It gives special attention to the philosopher's political involvement with the Nazis in the 1930s, indicating the strengths and weaknesses of the reactions to his politics, reactions ranging from exculpation to complete condemnation.

Richard Polt is Professor of Philosophy at Xavier University, Cincinnati. He is the author of The Emergency of Being: On Heidegger's Contributions to Philosophy, also from Cornell.

1 The Question2 Beginnings
The roots
Theory of theory Dilthey and Husserl
Theory and life
Heidegger the teacher
Towards Being and Time3 Being and Time: Introduction and Division I
The problem and the goal
1: The mystery of Being
2: Ourselves as the starting point
3: Being and the sciences
4: Being and human existence
5, 6 and 8: The plan of Being and Time
7: The method of Being and Time
9-11: Existence and everydayness
12-13: Being-in-the-world and knowing
14-18: The world as a significant whole
19-21: The impoverished Cartesian "world"
22-24: Quantitative space and the space of appropriateness
25-27: Being-with and the "they"
28: The basic features of Being-in
29-30: Attunement
31-33: Understanding, interpretation and assertion
34: Discourse
35-38: Falling
39-42: Anxiety and care
43-44: Reality and truth4 Being and Time: Division II and Beyond
46-53: Facing up to mortality
54-60: Owning up to indebtedness and responsibility
63: Existentiell truth as the basis of existential truth
62, 64-65: Temporality as the key to the Being of Dasein
66-71: Reinterpreting everydayness in terms of temporality
72-77: History, heritage and fate
78-82: Primordial temporality and the ordinary concept of time
A glimpse of Division III5. Later Heidegger
Signs of the turn
"What is Metaphysics?": nothingness and the disintegration of logic
"On the Essence of Truth": unconcealment and freedom
Introduction to Metaphysics: the history of the restriction of Being
"The Origin of the Work of Art": the clash of earth and world
Contributions to Philosophy: fragments of another beginning
Machination and lived experience
Being as appropriation
Truth as sheltering
The way from beings to Being
Heidegger's politics: facts and thoughts
"Letter on Humanism": existentialism, humanism and ethics
"The Question Concerning Technology": beings as manipulable resources
Poetry and language
The final analysis?Selected Bibliography
Index

GOR010744253
Heidegger: An Introduction by Richard Polt
Richard Polt
Used - Good
Hardback
Cornell University Press
1997-12-19
216
0801435846
9780801435843
N/A
Book picture is for illustrative purposes only, actual binding, cover or edition may vary.
The book has been read but remains in clean condition. All pages are intact and the cover is intact. Some minor wear to the spine.