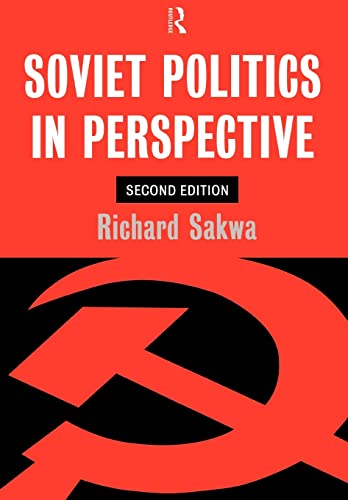 In Stock
$43.99
inc. GST
Thoroughly revised and updated, this text offers offers a comprehensive and accessible exploration of the Soviet system from its rise in 1919 to the 1991 collapse.
Very Good Good
Only 2 left

Soviet Politics in Perspective is a new edition of Richard Sakwas successful textbook Soviet Politics: an introduction. Thoroughly revised and updated it builds on the previous editions comprehensive and accessible exploration of the Soviet system, from its rise in 1919 to its collapse in 1991.

The book is divided into five parts, which focus on key aspects of Soviet politics. They are:

* historical perspectives, beginning with the Tsarist regime on the eve of Revolution, the rise and development of Stalinism, through to the decline of the regime under Brezhnev and his successors and Gorbachev's attempts to revive the system

* institutions of Government, such as the Communist Party, security apparatus, the military, the justice system, local government and participation

* theoretical approaches to Soviet politics, including class and gender politics, the role of ideology and the shift from dissent to pluralism

* an evaluation of Soviet rule, and reasons for its collapse.

Providing key texts and bibliographies, this book offers the complete history and politics of the Soviet period in a single volume. It will be indispensable to students of Soviet and post-Soviet politics as well as the interested general reader.

Part I History1. The Russian Legacy The Old Regime Social and economic developments Revolutionary movements and Bolshevism2. The Creation of the Soviet State The Revolutions of 1917 The formation of the Soviet State, 1918-21: The dictatorship of the proletariat and commune democracy, Civil war and armed peace, War communism, The oppositions3. Stalin and Stalinism The NEP compromise The great industrialization debate The revolution from above Command economy and society The great purges 'Stalinism'4. Khrushchev and Destalinisation The New Course Destalinization Economy and Society Authority and ideology Khrushchev's fall5. From Brezhnev to Gorbachev Corporatism and compromise The decline of the regime The final Soviet Politics, Andropov: the struggle for discipline, Chernenko: the struggle for conformity, Gorbachev: the struggle for changePart II Government6. The Communist Party Recruitment Organisation Party, state and government The leading role of the party The end of party rule7. The Structure of Power Constitutions and power The national legislature: The Supreme Soviet, The Congress of People's Deputies and the Supreme Soviet The government8. Security and Justice The military and Soviet politics The KGB Justice9. Local Government and Participation Local soviets and administration Elections Participation and socialisation: The meaning of participation, Institutional forms of participation, Non-institutional forms of participationPart III Politics10. Power and Policy-Making The role of leadership Models of Soviet power: Totalitarianism and concentration models, The group approach and diffusion models, Corporatism and other approaches11. Ideology and Authority The meaning of ideology The ideological apparatus The role of ideology Power, political culture and legitimacy12. Class and Gender New class and society The politics of gender13. From Dissent to Pluralism Political dissent and the state The evolution of dissent Strands of resistance The return of pluralism Dissent in perspectivePart IV Policies14. The Command Economy and Reform Planning and political economy History of economic reform The failure of reform15. Nationality Politics Soviet constitutions and federalism: Soviet constitutions, Soviet federalism Nationalism in the USSR The politics of nationalism16. Foreign and Defence Policy The course of Soviet foreign policy The making of foreign policy The politics of securityPart V Perspectives17. Rise and Fall Main features Patterns of Soviet rule Reasons for the fall18. Conclusion: Soviet Politics in Perspective

GOR001800491
Soviet Politics: In Perspective by Richard Sakwa
Richard Sakwa
Used - Very Good
Paperback
Taylor & Francis Ltd
1998-10-08
376
0415071534
9780415071536
N/A
Book picture is for illustrative purposes only, actual binding, cover or edition may vary.
This is a used book - there is no escaping the fact it has been read by someone else and it will show signs of wear and previous use. Overall we expect it to be in very good condition, but if you are not entirely satisfied please get in touch with us.