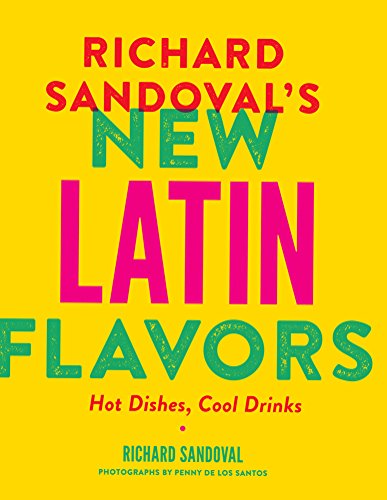 In New Latin Flavors, award-winning chef Richard Sandoval offers more than 125 vibrantly seasoned Latin dishes, inspired by his popular restaurant fare but carefully streamlined for the home cook. Quesadillas, ceviches, arepas, and enchiladas are offered with Sandoval's signature flair and bold flavors. The book also presents delectable cocktails featuring traditional Latin spirits that are beloved in the world of mixology-tequila, mescal, cachaca, rum, and pisco-and a variety of salsas, guacamoles, and other cocktail snacks. Whether the food is comfortingly familiar, like the Mahi-Mahi Tacos, or unex pected, like the Beef Tiradito with Wasabi Dressing, these recipes offer an exciting new vision of contemporary Latin cooking.

"Chef Richard's New Latin Flavors is the perfect inspiration for cooking and entertaining with bold yet balanced flavors. From classics like mahi mahi ceviche to twists on staples like the bacon guacamole, Richard inspires readers not only to cook with flavor but to enjoy it in the company of others with great entertaining--two things I can appreciate very much."--Michael Mina, chef
"There's a recipe for everyone in Richard Sandoval's New Latin Flavors. Richard offers a variety of delicious and innovative recipes that are approachable for any home cook and will leave you wanting more!"--Laurent Tourondel, restaurateur
Richard Sandoval is one of the greatest Mexican and Latin inspired Chefs of our generation. When Cindy and I travel, we look for Richard's restaurants knowing we will always have an unforgettable and delicious experience. Being a restaurateur myself, I appreciate great food and the highest quality ingredients. Richard's Brisket Tacos with Chipotle Slaw and Pickled Red Onions are one of our favorite dishes! We love making it at home for our friends and family served with Casamigos Tequila. Home entertaining at its best!

This book has amazing recipes! It's easy to understand and feels like taking a simplified Top Chef class in our home. Richard's approach is authentic, casual, and fun!--Rande Gerber & Cindy Crawford

Richard Sandoval grew up in Mexico City in a family of good cooks and restaurateurs. A CIA graduate, he opened his flagship restaurant, Maya, in New York City in 1997, which was awarded two stars by the New York Times. In 2002, STC published his first cookbook, Modern Mexican Flavors, which was based on the recipes at Maya (10,353 net). Today his broad range of restaurants-with locations in New York, Washington, D.C., Cailfornia, Florida, Mexico, Dubai and more-reflect his interest in pan-Latin cuisines.

GOR007740359
Richard Sandoval's New Latin Flavors by Richard Sandoval
Richard Sandoval
Used - Very Good
Hardback
Stewart, Tabori & Chang Inc
2014-10-01
224
1617691240
9781617691249
N/A
Book picture is for illustrative purposes only, actual binding, cover or edition may vary.
This is a used book - there is no escaping the fact it has been read by someone else and it will show signs of wear and previous use. Overall we expect it to be in very good condition, but if you are not entirely satisfied please get in touch with us.