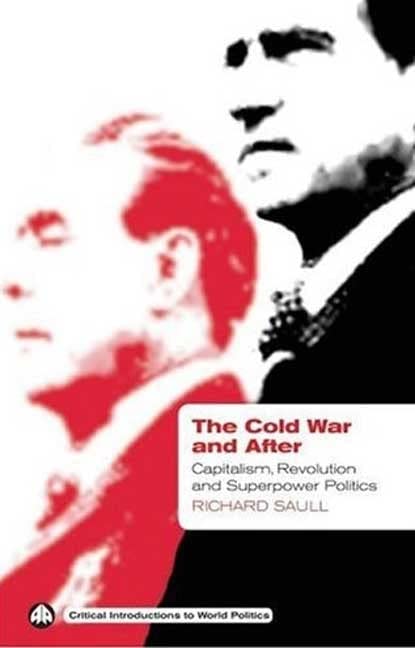 The Cold War and After
by Richard Saull

Out of Stock
$43.99
inc. GST
An alternative perspective on the Cold War that broadens our understanding of the nature of political conflict.
Very Good
Only 0 left

The Cold War and After Summary

The Cold War and After: Capitalism, Revolution and Superpower Politics by Richard Saull

The Cold War is often presented as an international power struggle between the Soviet Union and the US. Richard Saull challenges this assumption. He broadens our understanding of the defining political conflict of the twentieth-century by stressing the social and ideological differences of the superpowers and how these differences conditioned their international behaviour.

Saull argues that US-Soviet antagonism was part of a wider conflict between capitalism and communism involving states and social forces other than the superpowers. The US was committed to containing revolutionary and communist movements that emerged out of uneven capitalist development.

In highlighting the socio-economic and ideological dimensions of the Cold War, Saull not only provides a richer history of the Cold War than mainstream approaches, but is also able to explain why revolutionary domestic transformations caused international crises. Tracing the origins of new resistance to American global power, Saull's book provides an ideal alternative perspective on the Cold War and its end.

The Cold War and After Reviews

'A comprehensive reinterpretation of world politics in the 'short twentieth century' -- Mark Rupert, Professor of Political Science, Maxwell School of Citizenship & Public Affairs, Syracuse University, USA
'Richard Saull takes the long view of the rise and fall of the Cold War and into the turbulent history of the twentieth century. A must read for those looking for another way of thinking about our dark times' -- Professor Michael Cox, Department of International Relations and Director of the Cold War Studies Centre at the London School of Economics
'Demolishes standard accounts of the Cold War and its aftermath and ends with an intricate, complex approach to the political geography of the war on terror. An indispensable book' -- Professor Marilyn Young, Department of History, New York University
'Richard Saull's brilliant [book] is an indispensable account of the Cold War which challenges the standard accounts theoretically and analytically. He carries the reader along in a vigourously argued and persuasively written narrative. No other book on the Cold War comes close to Saull's striking integration of socio-economic, ideological, strategic and military perspectives' -- Professor Marilyn Young, Department of History, New York University
'Saull's survey of the theoretical debate on the Cold War is sophisticated and illuminating. It raises fundamental theoretical issues about the sociology of contemporary international politics' -- Peter Gowan, Professor of International Relations, London Metropolitan University

Richard Saull is Lecturer in International Politics in the Department of Politics, Queen Mary, University of London, and is the author of Rethinking Theory and History in the Cold War (Routledge, 2001) and The Cold War and After (Pluto, 2007).

Acknowledgements 1. Introduction: History and Theory in the Cold War 2. The International Impact of the Bolshevik Revolution and the Early Cold War, 1917-1945 3. The Cold War Transformed: Geopolitical Restructuring and a New Wave of Social Revolution, 1945-49 4. The Militarization of Cold War: The Containment of the USSR 4 and the Emergence of New Revolutionary Fronts, 1950-62 5. The Final Gasp of Cold War: The Decline of US Military Superiority and the Expansion of International Communist Power, 1962-80 6. Ending the Cold War: From Militarized Counter-Revolution to the Collapse of Soviet Communism, 1980-91 7. Conclusions: Tracing the Paradoxical Ends of the Cold War and the Origins of Contemporary Conflict in World Politics Select Bibliography Index

GOR005533552
The Cold War and After: Capitalism, Revolution and Superpower Politics by Richard Saull
Richard Saull
Critical Introductions to World Politics
Used - Very Good
Paperback
Pluto Press
2007-01-01
288
0745320945
9780745320946
N/A
Book picture is for illustrative purposes only, actual binding, cover or edition may vary.
This is a used book - there is no escaping the fact it has been read by someone else and it will show signs of wear and previous use. Overall we expect it to be in very good condition, but if you are not entirely satisfied please get in touch with us.