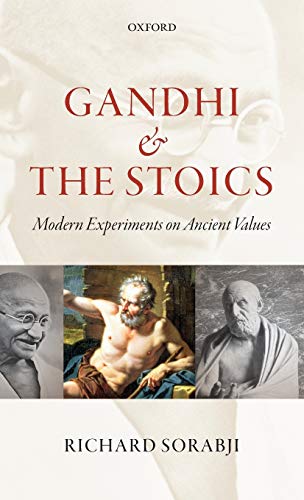 Gandhi and the Stoics
by Richard Sorabji (Wolfson College, Oxford)

Out of Stock
$60.99
inc. GST
Richard Sorabji presents a fascinating study of Gandhi's philosophy in comparison with Christian and Stoic thought. He shows that Gandhi was a true philosopher, who not only aimed to give a consistent self-critical rationale for his views, but also thought himself obliged to live by what he taught.
Very Good
Only 0 left

Gandhi and the Stoics Summary

Richard Sorabji presents a fascinating study of Gandhi's philosophy in comparison with Christian and Stoic thought. Sorabji shows that Gandhi was a true philosopher. He not only aimed to give a consistent self-critical rationale for his views, but also thought himself obliged to live by what he taught-something that he had in common with the ancient Greek and Christian ethical traditions. Understanding his philosophy helps with re-assessing the consistency of his positions and life. Gandhi was less influenced by the Stoics than by Socrates, Christ, Christian writers, and Indian thought. But whereas he re-interpreted those, he discovered the congeniality of the Stoics too late to re-process them. They could supply even more of the consistency he sought. He could show them the effect of putting their unrealised ideals into actual practice. They from the Cynics, he from the Bhagavadgita, learnt the indifference of most objectives. But both had to square that with their love for all humans and their political engagement. Indifference was to both a source of freedom. Gandhi was converted to non-violence by Tolstoy's picture of Christ. But he addressed the sacrifice it called for, and called even protective killing violent. He was nonetheless not a pacifist, because he recognized the double-bind of rival duties, and the different duties of different individuals, which was a Stoic theme. For both Gandhi and the Stoics it accompanied doubts about universal rules. Sorabji's expert understanding of these ethical traditions allows him to offer illuminating new perspectives on a key intellectual figure of the modern world, and to show the continuing resonance of ancient philosophical ideas.

Gandhi and the Stoics Reviews

What is especially intriguing about the comparisons that Sorabji goes on to make is that, while the Stoics anchor their ethics in a more or less clear materialistic metaphysical framework, Gandhi does no such thing. * Lloyd P. Gerson, The Philosophical Quarterly *
There is a curiosly popular conception of studies in ancient philosphy being "mere history of" philosophy as opposed to work citing more recent authors being the actual stuff. A less common but similarly limited misnomer is the replacement of good old "classical philology" with "study of antiquity". Gandhi and the Stoics could even enlighten sould shadowed by such limitations. * Teemu Huttunen, Arctos *

Richard Sorabji is author or editor of over 100 books in the History of Philosophy. Three authored books deal with the nature of the physical universe (Necessity, Cause and Blame; Time, Creation and the Continuum; Matter, Space and Motion). Four deal with Mind and Morals (Animal Minds and Human Morals; Emotion and Peace of Mind; Aristotle on Memory; Self: Individuality, Life and Death). He has written a biography, Opening Doors, of the pioneer lawyer, Cornelia Sorabji. His next book will be Moral Conscience through the Ages. He is Honorary Fellow of Wolfson College, Oxford; Fellow and Emeritus Professor of King's College, London; former Director of the Institute of Classical Studies, London, 1991-6; former President of the Aristotelian Society, 1985-6; and former Gresham Professor of Rhetoric 2000-2003.

Introduction: Gandhi's use of Platonic, Christian, and Stoic values: reinterpretation, experimentation, and mere convergence ; 1. Emotional detachment: how to square it with love of family and all humans in the Stoics and Gandhi ; 2. Emotional detachment: how to square with politics in the Stoics and Gandhi ; 3. Individual freedom: Gandhi's and Isaiah Berlin on Zeno's-sour grapes? ; 4. Non-violence as universal love: origins and Gandhi's supplements to Tolstoy-dilemmas, successes, and failures ; 5. From universal love to human rights? ; 6. Individual duty: persona, svadharma ; 7. General rules in morality ; 8. Moral conscience ; 9. Restrictions on private property in Gandhi, Christianity, Plato, and the Stoics ; 10. Isaiah Berlin's Stoic revolution: depoliticisation ; Select Bibliography ; Index

GOR005533984
Gandhi and the Stoics: Modern Experiments on Ancient Values by Richard Sorabji (Wolfson College, Oxford)
Richard Sorabji (Wolfson College, Oxford)
Used - Very Good
Hardback
Oxford University Press
2012-09-27
240
0199644330
9780199644339
N/A
Book picture is for illustrative purposes only, actual binding, cover or edition may vary.
This is a used book - there is no escaping the fact it has been read by someone else and it will show signs of wear and previous use. Overall we expect it to be in very good condition, but if you are not entirely satisfied please get in touch with us.