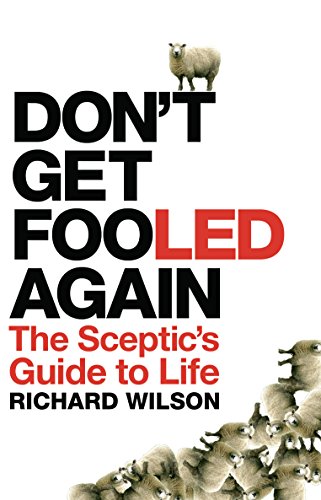 Used Price
$15.49
inc. GST
Free Shipping in Australia
Offers practical tools for cutting through the claptrap and unravelling the spin - tackling propaganda, the psychology of deception, pseudo-news, bogus science, the weird cult of 'Aids reappraisal', and numerous conspiracy theories (including the one about weapons of mass destruction in Iraq).
Reviews:
Trustpilot
Good

Don't Get Fooled Again: The Sceptic's Guide to Life by Richard Wilson

Why is it that, time and again, intelligent, educated people end up falling for ideas that turn out on closer examination to be nonsense? We live in a supposedly rational age, yet crazy notions seem increasingly mainstream. New Age peddlers claim to cure Aids with vitamin tablets. Media gatekeepers stoke panic and regurgitate corporate press releases in the name of 'balance'. Wild-eyed men in sandwich boards blame it all on the CIA.Even the word 'sceptic' has been appropriated by cranks and conspiracy theorists bent on rewriting history and debunking sound science. But while it may be easier than ever for nonsense to spread, it's never been simpler to fight back. "Don't Get Fooled Again" offers practical tools for cutting through the claptrap and unravelling the spin - tackling propaganda, the psychology of deception, pseudo-news, bogus science, the weird cult of 'Aids reappraisal', numerous conspiracy theories (including the one about weapons of mass destruction in Iraq), and much more. Richard Wilson's book is user-friendly, enjoyable, shot through with polemic - and argues forcefully for a positive solution.

Reviews for his first book, 'Titanic Express': "'Incredibly moving' Ziauddin Sardar, Independent 'An astonishing chronicle' Bronwen Maddox, The Times 'I have watched in growing admiration how, with dogged persistence, Richard Wilson has conducted a singular crusade, not just to bring his sister's murderers to justice, but to understand who they were and why they killed her.' Jon Swain, Sunday Times"
`An enjoyable polemic against pretty much everything really, and as it rips apart our own gullibility and life in general, it also manages to highlight a lot of the basic philosophical premises that we have opted into without giving them real consideration in the first place. An enjoyable diatribe, indeed.' -- Publishing News
'Richard's Wilson's [book] has been likened to Francis Wheen's `How Mumbo-Jumbo Conquered the World.' It provides an objective and philosophical dissection of some commonly held beliefs. Almost a self-help book, this provides the reader with the analytical tools to avoid being taken for a ride, as well as being entertaining and informative.' -- Patrick Neale, Bookseller
`... a very useful handbook for people who know that things they read in the paper or hear on the television are "not quite right" and need to be challenged.' -- A Common Reader
'Written in lucid prose, well researched and strongly argued, `Don't Get Fooled Again' is a great little book. It has reminded me of the virtues of scepticism (as distinct from cynicism, which is unthinking negativity and expecting the worst in all circumstances). So, if you don't want to buy a pig in a poke, have the wool pulled over your eyes or be an unquestioning sheep, then this is the book for you.' -- Bookgeeks
`There's so much gold in Wilson's book it's hard to pick out specific examples. Wilson explains in a wonderful aside that the brain regenerates itself every seven years - meaning in effect that you will be a completely different person by November 30 2015. He shatters the postmodern paradigm of a Western imperial Enlightenment forced upon complaining natives by discussing the developing world's substantial contributions to science.' -- Max Dunbar
`Prescribed read for the hype-harassed and panic-pumped.' -- Hindu
`It's refreshing to read this new book by Richard Wilson.' -- Brendan Wallace, Fortean Times
`Wilson's book is a necessary and well-written guide to guarding yourself against 'being fooled again'.' -- Brendan Wallace, Fortean Times

Richard Wilson read Philosophy at University College London. His first book, Titanic Express, recounts his search for the truth about the death of his sister Charlotte, who was killed in Burundi in 2000. He now works for a human rights organisation and lives in London with his wife, Heleen.