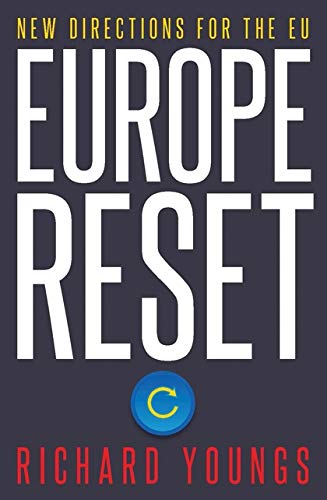 Europe Reset: New Directions for the EU by Richard Youngs

In the last decade, the EU has been hit by a series of crises, most recently the UK's decision to leave the union following the Brexit referendum. In light of this, questions have been raised about the need to reform the whole model of European integration, with the aim of making the union more flexible and more accountable. In this book, Richard Youngs proposes an alternative vision of European co-operation and shows how the EU must re-invent itself if it is to survive. He argues that citizens should play a greater role in European decision-making, that there should be radically more flexibility in the process of integration and that Europe needs to take a new, more coherent, approach to questions of defence and security. In proposing this model for a `reset' version of Europe, Youngs reinvigorates the debate around the future of Europe and puts forward a new agenda for the future of the EU.

"Citing a series of crises including Brexit, Youngs argues that the EU needs to be reformed to secure its future. He suggests a 'reset' of the European model."

Richard Youngs is Senior Fellow at Carnegie Europe and Professor of International Relations at the University of Warwick. He was previously Director of the European think-tank FRIDE and has held positions in the UK Foreign and Commonwealth Office, as an EU Marie Curie fellow and as a Senior Fellow at the Transatlantic Academy in Washington, DC. Youngs has authored 11 books, including recently Europe's Eastern Crisis and Europe in the New Middle East.

GOR011104422
Europe Reset: New Directions for the EU by Richard Youngs
Richard Youngs
Used - Well Read
Paperback
Bloomsbury Publishing PLC
2017-10-24
256
1788310578
9781788310574
N/A
Book picture is for illustrative purposes only, actual binding, cover or edition may vary.
This is a used book. We do our best to provide good quality books for you to read, but there is no escaping the fact that it has been owned and read by someone else previously. Therefore it will show signs of wear and may be an ex library book.