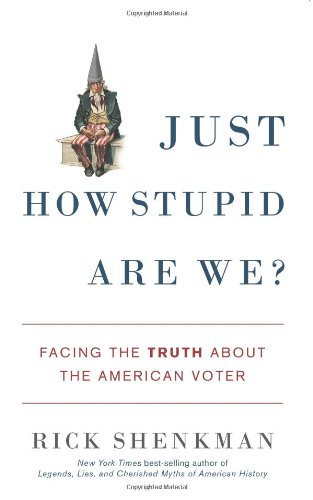 Eight Myths That are Ruining America
by Rick Shenkman

Out of Stock
$25.99
inc. GST
Politicians tell us constantly that they trust the wisdom of The American People. New York Times best-selling author Rick Shenkman explains why we shouldnt-at least when it comes to politics
Very Good
Only 0 left

Eight Myths That are Ruining America: Just How Stupid are We by Rick Shenkman

Levees break in New Orleans. Iraq descends into chaos. The housing market teeters on the brink of collapse. Americans of all political stripes are heading into the 2008 election with the sense that something has gone terribly wrong with American politics. But what exactly? Democrats blame Republicans and Republicans blame Democrats. Greedy corporate executives, rogue journalists, faulty voting machines, irresponsible defense contractors-we blame them, too. The only thing everyone seems to agree on, in fact, is that the American people are entirely blameless. In Just How Stupid Are We?, best-selling historian and renowned myth-buster Rick Shenkman takes aim at our great national piety: the wisdom of the American people. The hard truth is that American democracy is more direct than ever-but voters are misusing, abusing, and abdicating their political power. Americans are paying less and less attention to politics at a time when they need to pay much more: Television has dumbed politics down to the basest possible level, while the real workings of politics have become vastly more complicated. Shenkman offers concrete proposals for reforming our institutions-the government, the media, civic organizations, political parties-to make them work better for the American people. But first, Shenkman argues, we must reform ourselves.

Michael Beschloss
"At a moment when Americans are choosing leaders, Rick Shenkman's brisk, provocative and vigorously argued book implores us to rethink our roles as citizens and improve our political environment. There could not be a better time for this important message."
Jon Wiener, Professor of History at University of California at Irvine and author of "Historians in Trouble"
"The bad news is that Americans are ignorant, shortsighted, and swayed by meaningless phrases; the good news is that things could get better--if we start speaking honestly about the problem. Rick Shenkman's book is a crucial starting point in that process."
Ruth Rosen, Professor Emerita of History, University of California, Davis
"Are manipulative politicians and an intimidated media the only reasons we've had to suffer through the Bush years? What about the American people? Why don't they stop, pay attention, and think for themselves? In his candid and hard-hitting history of American political culture, Shenkman offers a compelling and disturbing analysis of the American people and why we get the government we deserve."
Rick Perlstein, author of "Before the Storm: Barry Goldwater and the Unmaking of American Consensus"
"A smart, stylish, and witty wrestling match with the most difficult problem a democracy can face."
Bernard A. Weisberger, author of "America Afire"
"With wit, passion and devastating evidence, Shenkman compels us, the praised and petted 'American people, ' to look in the mirror for an explanation of why our elections are travesties of informed, intelligent debate. Lively and crucial, the book reminds us, however we vote, that there's no such animal as 'democracy for dummies.'"
"New York Observer"
"Slender, lively and highly accessible ....it tackles one of the weightiest problems troubling American public life"

Rick Shenkman is an award-winning investigative reporter, a New York Times best-selling author, and the editor and founder of George Mason University's History News Network, a website that features articles by historians on current events. An associate professor of history at George Mason University, he appears regularly as a commentator on Fox News, CNN, and MSNBC. He books include Legends, Lies, and Cherished Myths of American History and Presidential Ambition: How the Presidents Gained Power, Kept Power, and Got Things Done. He lives in Seattle, Washington.

GOR004285354
Eight Myths That are Ruining America: Just How Stupid are We by Rick Shenkman
Rick Shenkman
Used - Very Good
Hardback
INGRAM PUBLISHER SERVICES US
2008-05-13
224
0465077714
9780465077717
N/A
Book picture is for illustrative purposes only, actual binding, cover or edition may vary.
This is a used book - there is no escaping the fact it has been read by someone else and it will show signs of wear and previous use. Overall we expect it to be in very good condition, but if you are not entirely satisfied please get in touch with us.