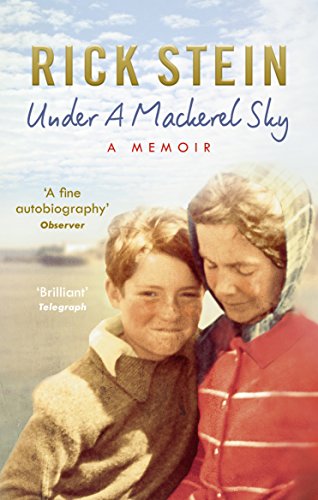 Under a Mackerel Sky
by Rick Stein

Used Price
$18.99
inc. GST
Free Shipping in Australia
`All men should strive to learn before they die what they are running from, and to, and why'Rick Stein's childhood in 1950s rural Oxfordshire and North Cornwall was idyllic.
Reviews:
Trustpilot
Very Good Good Well Read

Under a Mackerel Sky Summary

Under a Mackerel Sky by Rick Stein

`All men should strive to learn before they die what they are running from, and to, and why' Rick Stein's childhood in 1950s rural Oxfordshire and North Cornwall was idyllic. His parents were charming and gregarious, their five children much-loved and given freedom typical of the time. As he grew older, the holidays were filled with loud and lively parties in his parents' Cornish barn. But ever-present was the unpredicatible mood of his bipolar father, with Rick frequently the focus of his anger and sadness. When Rick was 18 his father killed himself. Emotionally adrift, Rick left for Australia, carrying a suitcase stamped with his father's initials. Manual labour in the outback followed by adventures in America and Mexico toughened up the naive public schoolboy, but at heart he was still lost and unsure what to do with his life. Eventually, Cornwall called him home. From the entrepreneurial days of his mobile disco, the Purple Tiger, to his first, unlikely unlikely nightclub where much of the time was spent breaking up drink-fuelled fights, Rick charts his personal journey in a way that is both wry and perceptive; engaging and witty. Shortlisted for the Specsavers National Book Awards 2013

Customer Reviews - Under a Mackerel Sky

Under a Mackerel Sky Reviews

"Stein's brilliant memoir traces his halcyon days spent in Australia, culminating on his home turf, Cornwall." -- The Daily Telegraph * The Daily Telegraph *
"Dealing with his father's suicide by heading for the outback, catching a freighter from New Zealand to New York, running a nightclub: Stein has plenty to talk about before he gets to fish restaurants in Padstow and becoming a fixture of food TV. His fine autobiography never shies away from that defining tragedy and how it rippled through his life, even revealing his sudden need, last summer, to swim to the Cornish cliffs where his dad died." -- Allan Jenkins and Gareth Grundy * The Observer Food Monthly *

Rick Stein's passion for using good-quality local produce and his talent for creating delicious flavour combinations in his books and restaurants have won him a host of awards, accolades and fans. As well as presenting a number of television series, he has published many best-selling cookery books, including French Odyssey, Coast to Coast, Far Eastern Odyssey and Rick Stein's Spain. Rick is a firm supporter of sustainable fishing techniques and farming, which he strives to maintain in Padstow, Cornwall, where he runs an acclaimed restaurant and a seafood cookery school, as well as a delicatessen, patisserie and hotel. In 2003 Rick was awarded an OBE for services to West Country tourism. He divides his time between Padstow and Australia, which he regards as his second home. Rick and his wife Sarah are co-owners of Rick Stein at Bannisters, Mollymook, NSW.

GOR006061473
Under a Mackerel Sky by Rick Stein
Rick Stein
Used - Very Good
Paperback
Ebury Publishing
2014-08-28
320
0091949912
9780091949914
N/A
Book picture is for illustrative purposes only, actual binding, cover or edition may vary.
This is a used book - there is no escaping the fact it has been read by someone else and it will show signs of wear and previous use. Overall we expect it to be in very good condition, but if you are not entirely satisfied please get in touch with us.