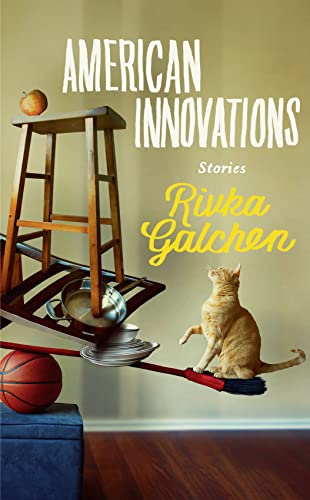 In one of these intensely imaginative stories a young woman's furniture walks out on her. In another, the narrator feels compelled to deliver a takeout order that has incorrectly been phoned in to her. In a third, the petty details of a property transaction illuminate the complicated dependences and loves of a family.

Following spiralling paths towards utterly logical, entirely absurd conclusions, Galchen's creations occupy a dreamlike dimension, where time is fluid and identities are best defined by the qualities they lack. The tales in this groundbreaking collection are secretly in conversation with canonical stories, allowing the reader the pleasure of discovering familiar favourites in new guises. Here `The Lost Order' covertly recapitulates James Thurber's `The Secret Life of Walter Mitty', while `The Region of Unlikeness' playfully mirrors Jorge Luis Borges's `The Aleph'.

By turns realistic, fantastical and lyrical, all these marvellously uneasy stories share a deeply emotional core and are written in dryly witty, pitch-perfect prose. Whether exploring the tensions in a mother-daughter relationship or the finer points of time travel, Galchen is a writer of eye-opening ingenuity.

`Inventive and appealing' Independent on Sunday

`Dazed ... Strikingly beautiful ... Galchen's stories are funny and inventive. Many of them slyly translate the concerns of 19th-century fiction - money, property, gender - into the affectless, ironic voice of modern American fiction ... One of the pleasures of American Innovations is the way the stories quietly echo and seep into one another... The prose is always expertly controlled' David Wolf, Guardian

'What is strongest in the novel is the delicacy with which Galchen evokes the bewildering randomness of Leo's visionary insanity ... An original and affecting novel, one that knows how to move from the comic to the painful.' James Wood, New Yorker

'Genuinely suspenseful, fresh and wry ... Galchen is a writer to be watched.' The Economist

`Playful yet profound, Murakami-esque yet original, analytical yet heartbreaking. It's an absolutely stunning and unforgettable debut.' Vendela Vida, author of `Let the Northern Lights Erase Your Name'

'A powerful novel about love, longing, Doppler radar, and the true appreciation of a nice cookie with your tea. "Atmospheric Disturbances" is fantastic.' Nathan Englander, author of 'The Ministry of Special Cases'

Rivka Galchen grew up in Oklahoma, the child of Israeli immigrants. She received her MD from Mount Sinai School of Medicine, having spent a year in South America working on public health issues. Her fiction and essays have appeared The Believer, Harper's, The New Yorker, Scientific American and The New York Times. Her first novel, Atmospheric Disturbances, was published in 2008 and in 2010 she was named by The New Yorker as one of the top twenty American authors under the age of forty.

GOR005884880
American Innovations by Rivka Galchen
Rivka Galchen
Used - Very Good
Hardback
HarperCollins Publishers
2014-05-08
192
0007548788
9780007548781
N/A
Book picture is for illustrative purposes only, actual binding, cover or edition may vary.
This is a used book - there is no escaping the fact it has been read by someone else and it will show signs of wear and previous use. Overall we expect it to be in very good condition, but if you are not entirely satisfied please get in touch with us.