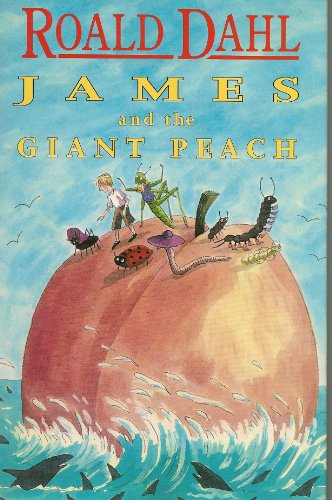 James and the Giant Peach
by Roald Dahl

Out of Stock
$62.99
inc. GST
Roald Dahl's first book for children, this is the story of James who escapes ill-treatment by his wicked aunts into the glorious world of adventure inside a giant peach, with amazing characters including a great vain centipede and a sentimental spider.
Well Read
Only 0 left

James and the Giant Peach Summary

James and the Giant Peach by Roald Dahl

An enormous escaped rhinoceros from London Zoo has eaten James's parents. And it gets worse! James is packed off to live with his two really horrible aunts, Sponge and Spiker. Poor James is miserable, until something peculiar happens and James finds himself on the most wonderful and extraordinary journey he could ever imagine...

Roald Dahl(1916-1990) was born in Wales of Norwegian parents. He spent his childhood in England and, at age eighteen, went to work for the Shell Oil Company in Africa. When World War II broke out, he joined the Royal Air Force and became a fighter pilot. At the age of twenty-six he moved to Washington, D.C., and it was there he began to write. His first short story, which recounted his adventures in the war, was bought byThe Saturday Evening Post, and so began a long and illustrious career.
After establishing himself as a writer for adults, Roald Dahl began writing children s stories in 1960 while living in England with his family. His first stories were written as entertainment for his own children, to whom many of his books are dedicated.
Roald Dahl is now considered one of the most beloved storytellers of our time. Although he passed away in 1990, his popularity continues to increase as his fantastic novels, includingJames and the Giant Peach, Matilda, The BFG, andCharlie and the Chocolate Factory, delight an ever-growing legion of fans.
Learn more about Roald Dahl on the official Roald Dahl Web site: www.roalddahl.com"

GOR002182086
James and the Giant Peach by Roald Dahl
Roald Dahl
Used - Well Read
Hardback
Penguin Books Ltd
1993-09-30
144
067085302X
9780670853021
N/A
Book picture is for illustrative purposes only, actual binding, cover or edition may vary.
This is a used book. We do our best to provide good quality books for you to read, but there is no escaping the fact that it has been owned and read by someone else previously. Therefore it will show signs of wear and may be an ex library book.