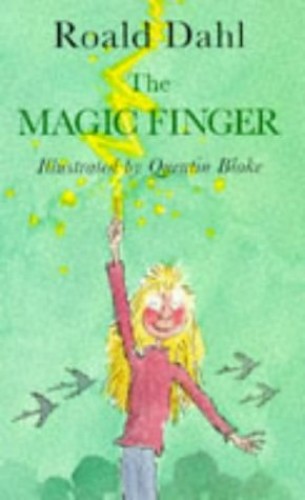 The Magic Finger
by Roald Dahl

Used Price
$13.69
inc. GST
Free Shipping in Australia
The little girl in this story is very unusual. She simply cannot control herself when things go wrong and inflicts punishment on others by pointing at them with her magic finger. The results are amazing from the moment her teacher grows whiskers and a tail.
Reviews:
Trustpilot
Very Good Good

The Magic Finger by Roald Dahl

The Gregg family loves hunting, but their eight-year-old neighbor can't stand it. After countless pleas for them to stop are ignored, she has no other choice -- she has to put her magic finger on them. Now the Greggs are a family of birds, and like it or not, they're going to find out how it feels to be on the other end of the gun.

GOR001804926
The Magic Finger by Roald Dahl
Roald Dahl
Used - Very Good
Hardback
Penguin Books Ltd
1996-03-28
64
067085252X
9780670852529
N/A
Book picture is for illustrative purposes only, actual binding, cover or edition may vary.
This is a used book - there is no escaping the fact it has been read by someone else and it will show signs of wear and previous use. Overall we expect it to be in very good condition, but if you are not entirely satisfied please get in touch with us.