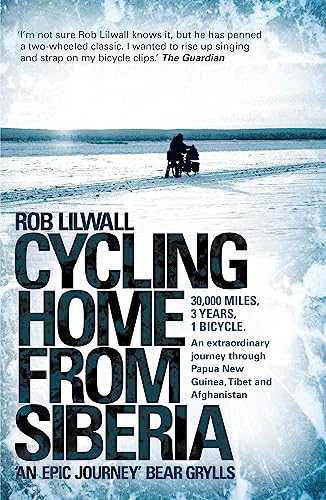 In Stock
$15.99
inc. GST
The gripping adventure story of one man's epic journey back from Siberia to England by bike
Like New Very Good Good Well Read
Only 1 left

'It is late October, and the temperature is already -40C...My thoughts are filled with frozen rivers that may or may not hold my weight; empty, forgotten valleys haunted by emaciated ghosts and packs of ravenous, merciless wolves.'In 2004 Rob Lilwall arrived in Siberia equipped only with a bike and a healthy dose of fear. CYCLING HOME FROM SIBERIA recounts his epic three and a half year, 30,000 mile journey back to England via the foreboding jungles of Papua New Guinea, an Australian cyclone and Afghanistan's war-torn Hindu Kush.A gripping story of endurance and adventure, this is also a spiritual journey giving a poignant insight into life on the road in some of the world's toughest corners.www.roblilwall.com

I'm not sure Rob Lilwall knows it, but he has penned a two-wheeled classic. I wanted to rise up singing and strap on my bicycle clips. -- Kevin Rushby * The Guardian *
Lilwall has a wonderful ability to inspire trust in his readers. * The Guardian *
Lilwall's story is a remarkable one ... enhanced by the fact that he has a writer's skill for conveying a sense of place. * The Sunday Telegraph *
A rite of passage adventure, full of thrills, excitement and endurance tests. * Irish Times *
Not only describes different countries and their peoples, but also delves into the human heart. -- Amy Boucher Pye * Woman Alive *
A real adventure story * The Baptist Times *
Rob Lilwall is such a transparently decent, honest and likeable bloke that it is difficult not to become involved in the highs and lows of his journey. 7/10 -- Martin Spice * Times Educational Supplement *

Rob Lilwall is a writer, adventurer, theology student and motivational speaker, who regularly transfixes audiences with tales from his 30,000 mile journey by bike from Siberia to England. Rob has written about his journey for magazines and journals worldwide. In 2004 Rob gave up his job as a geography teacher at a state school near Oxford and set off around the world with nothing but a bike and a healthy dose of fear ... around 3 years later he arrived home, with some remarkable stories to tell.

GOR010629820
Cycling Home From Siberia by Rob Lilwall
Rob Lilwall
Used - Like New
Paperback
Hodder & Stoughton General Division
2010-08-19
384
0340979860
9780340979860
N/A
Book picture is for illustrative purposes only, actual binding, cover or edition may vary.
The book has been read, but looks new. The book cover has no visible wear, and the dust jacket is included if applicable. No missing or damaged pages, no tears, possible very minimal creasing, no underlining or highlighting of text, and no writing in the margins.