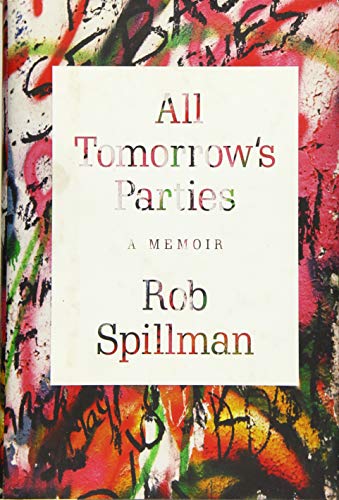 All Tomorrow's Parties
by Rob Spillman

All Tomorrow's Parties: A Memoir by Rob Spillman

Rob Spillman--the award-winning, charismatic cofounding editor of the legendary Tin House magazine--has devoted his life to the rebellious pursuit of artistic authenticity. Born in Germany to two driven musicians, his childhood was spent among the West Berlin cognoscenti, in a city two hundred miles behind the Iron Curtain. There, the Berlin Wall stood as a stark reminder of the split between East and West, between suppressed dreams and freedom of expression.

After an unsettled youth moving between divorced parents in disparate cities, Spillman would eventually find his way into the literary world of New York City, only to abandon it to return to Berlin just months after the Wall came down. Twenty-five and newly married, Spillman and his wife, the writer Elissa Schappell, moved to the anarchic streets of East Berlin in search of the bohemian lifestyle of their idols. But Spillman soon discovered he was chasing the one thing that had always eluded him: a place, or person, to call home. In his intimate, entertaining, and heartfelt memoir, Spillman narrates a colorful, music-filled coming-of-age portrait of an artist's life that is also a cultural exploration of a shifting Berlin.

Praise for All Tomorrow's Parties

"With wry humor and wonder, Spillman beautifully captures the deadpan hedonism of the East Berliners and the city's sense of infinite possibility, which, to his frustration, never quite imbues him with his own artistic compulsion. (One is reminded as much of Cyril Connolly's anti-bildingsroman 'Enemies of Promise' as Nick Hornby's culture besotted 'High Fidelity.')" --New York Times Book Review

"A thrilling portrait of the artist as intrepid young adventure seeker." --Vanity Fair

"Convivial, page-turning . . . Spillman's life is a good one to read." --Washington Post

"Truly exceptional memoirs have to do something more than recount a good origin story: they have to test the author's youthful understanding of the world, and break down that world, even as it's being built upon the page. All Tomorrow's Parties is such a memoir. Not only is it a super-fun, shatter-the-mirror joyride through Spillman's eccentric upbringing, but it's also replete with insightful double visions . . . [Spillman] manages to invoke both the dreamy, mythic version of life amid art and interesting scenery, and all the chaos and cracks and potential car crashes that threaten it . . . A thrill to read." --Interview Magazine

"Compelling . . . [with] captivating journeys of self-discovery . . . [this] memoir says exactly the right things in the most engaging way." --Minneapolis Star Tribune

"[A] meditation on place and placelessness, and the thrilling, dangerous, necessary place that both art and the artist occupy in the world." --NPR.org

"An artful and irreverent memoir . . . Spillman shares an unusual immigrant story--of a white boy born to American parents; an unusual German story--not of the Holocaust, but of the Cold War; and an unusual love story that takes driving (and running) across a continent to find its way back home. These pages are proof that Spillman has filled his father's footsteps to live for art." --Brooklyn Rail

"Spillman is happiest when he is betwixt and between--on the road, crossing borders, running long distances. This is a realm he knows intimately and documents beautifully in All Tomorrow's Parties, a yearning, restless memoir about a lost boy looking for home." --Los Angeles Review of Books

"A culturally saturated, Technicolor account of the author's unusual upbringing and the intentional adventures of his young adulthood . . . It is a shrine filled with relics for the people and the art he loves. It quivers with the type of honesty it takes to admit your deepest, most damning secrets. But Spillman isn't angling for sympathy. Instead he is bold and almost defiant. All Tomorrow's Parties is a major achievement and a reflection of the epigraph for chapter 59, which is a Denis Johnson quote: 'Write naked. Write from exile. Write in blood.'" --The Rumpus

"Wondrous . . . every page [is] an ecstatic celebration of this thing called life in all of its weird and short glory." --Vol. 1 Brooklyn

"Engrossing. . . . provides a fine and stark description of lives lived in the shadows of Glasnost, perestroika and the disintegration of the Soviet Union." --Winnipeg Free Press

"Revealing and energetic . . . a captivating story of both personal awakening and cultural upheaval." --Bookreporter

"A captivating coming-of-age story and snapshot of a city in flux." --Toronto Star METRO

"In this carefully wrought coming-of-age memoir, a young American writer searches for home in an unlikely place: East Berlin immediately after the fall of the wall. . . . His is a quest of roots and writerly authenticity--and his evocation of East Berlin's days is exquisite and revealing." --Publishers Weekly (starred review)

"Lifelong exposure to passionate artists may have fueled [Spillman's] creativity, but an existential dread that he won't find passion in his own life gnaws at him. . . . This is the story of formative years spent struggling to fully embrace life at the crossroads of history, art, home, and family." --Booklist (starred review)

"[A] lively debut. . . . Musically and culturally astute, this well-structured book is a delightful coming-of-age story couched within a travel narrative that deftly evokes one of the major historical moments of the 20th century. A richly detailed and always engaging memoir on artistic discovery." --Kirkus Reviews (starred review)

"If you've ever been young, in love, and desperate to live an authentic life, this book is for you: a ravishing memoir about a young man's quest for art, meaning, and a place to call home." --Anthony Doerr, author of All the Light We Cannot See

"Rob Spillman's story of rarefied opera culture as a child, and East German nightlife an adult, is limpid and lively in its telling, and it covers fascinating ground. Spillman is endearing and frank in his various adventures in a way that kept reminding me of Griffin Dunne in the movie After Hours, except instead of winding up in Club Berlin, he finds himself in the real one." --Rachel Kushner, author of The Flamethrowers

"As the editor of Tin House magazine, Rob Spillman has spent a good chunk of his adult life helping other writers tell their stories. Now, he is telling his. Finally. And what a story it is. Part survivor's manual, part travelogue, part cultural history, it's a story of an arts-mad, idealistic, brave young man struggling to make his way -- and find a place in the world. Set in large part against the backdrop of Berlin in the raucous months after the wall was torn down and people struggled with re-unification, Spillman unspools a story that will resonate with everyone who's ever searched for home." --Michael Hainey, author of After Visiting Friends

"How anyone becomes who they are meant to be is an enduring mystery, yet Rob Spillman takes us along on the wild ride that led him to become the utterly compelling and generous presence he is today. It is a portrait of the artist as a young man, retracing the steps that led him to a deeper truth, which (of course) lay outside himself. Spillman brilliantly--thrillingly--captures the velocity and the changing sounds of youth as it simultaneously hurls away from, and toward, home. This memoir rivets me to the page." --Nick Flynn, author of Another Bullshit Night In Suck City

"Rob Spillman's memoir is built out of an extraordinary and extraordinarily powerful and significant paradox: Spillman wants only art; at every juncture he chooses only life; the book succeeds precisely because we love Spillman for what he decries in himself. An achingly beautiful and brilliantly structured book." --David Shields, author of Reality Hunger: A Manifesto

Rob Spillman is editor of Tin House magazine and editorial advisor of Tin House Books. He was previously the monthly book columnist for Details magazine and is a contributor of book reviews and essays to Salon and Bookforum. He has written for the Boston Review, GQ, Details, the New York Times Book Review, Rolling Stone, Spin, Sports Illustrated, Vanity Fair, and Vogue, among other magazines, newspapers, and online magazines. He has also worked for Random House, Vanity Fair, and The New Yorker. He also teaches at various MFA programs, including Columbia University.

GOR008954958
All Tomorrow's Parties: A Memoir by Rob Spillman
Rob Spillman
Used - Very Good
Hardback
Grove Press / Atlantic Monthly Press
2016-04-21
400
0802124836
9780802124838
N/A
Book picture is for illustrative purposes only, actual binding, cover or edition may vary.
This is a used book - there is no escaping the fact it has been read by someone else and it will show signs of wear and previous use. Overall we expect it to be in very good condition, but if you are not entirely satisfied please get in touch with us.