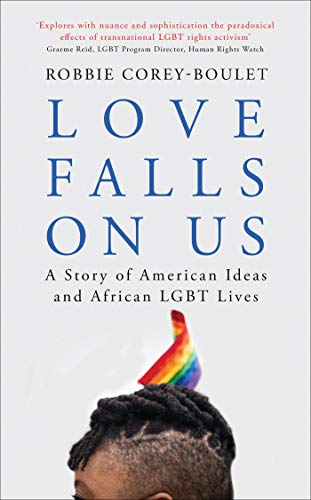 Love Falls On Us
by Robbie Corey-Boulet

A moving investigation that exposes the impact of international intervention, both joyful and tragic, on the lives of African sexual minorities and their loved ones

Love Falls On Us Summary

Love Falls On Us: A Story of American Ideas and African LGBT Lives by Robbie Corey-Boulet

In 2009 Uganda's Anti-Homosexuality Bill became a top global news story. Two years later Hillary Clinton declared "Gay rights are human rights and human rights are gay rights," but still today there is little consensus on how to advance those rights beyond the U.S. and Europe. The fact is that international LGBT activism and allies have created winners and losers. In Africa those who easily identify with the identities of the global movement find support, funding and care. Those whose sexualities don't align so neatly don't.

In this faithful and moving investigation, award winning journalist Robbie Corey-Boulet shows that LGBT liberation does not look the same in Africa as it does in the United States or Europe. At a time when there is a groundswell of interest in LGBT life in Africa and attempts at reversing LGBT rights across much of the `developed' world Corey-Boulet lays bare past failures. To the extent that there exists a right way to engage on LGBT issues in Africa-and, indeed, worldwide-Love Falls on Us is for those looking to learn what it is.

Love Falls On Us Reviews

`At last, a book with fresh reporting and nuanced insight on the LGBT community in Africa. Corey-Boulet launches the reader into the fight for the rights of queer Africans, with thoughtful attention to the global and local dynamics of activism across cultures. Even better, he gives us more stories of ordinary African lives, animating them with context and charm. This is an important book.'
Dayo Olopade, author of The Bright Continent: Breaking Rules and Making Change in Modern Africa

'In Africa, gay rights - like most other human rights - exist in a tenuous state, merely tolerated in the best of times, violently repressed in the worst. But beneath the surface, gay lives go on, and unique forms of gay culture thrive even in hostile environments, as Robbie Corey-Boulet writes in this vivid and important book. Their voices are heard in Loves Falls on Us, loudly and irreverently, revealing surprising truths about Africa - and the people who misjudge it from afar.'
Andrew Rice, author of The Teeth May Smile But the Heart Does Not Forget

'Corey-Boulet offers a rare insight into the lives of queer men and women in three African countries. These moving life stories defy stereotypes of African queer people as passive victims in need of liberation, and show how the geopolitics of LGBTQ rights can inadvertently harm the very people they aim to help. Crafted by a gifted and sensitive writer, Love Falls On Us is a landmark of journalism that illuminates the deep story behind a sensationalistic issue drawing on both long-term investigative journalism and social studies. It will be essential reading for those involved in the global fight to combat homophobia but also to human rights activists, postcolonial scholars, and students of contemporary Africa.'
Professor Vinh-Kim Nguyen, Department of Anthropology, Graduate Institute of International and Development Studies

`Love Falls on Us offers moving accounts of LGBT Africans' lives and loves, while demystifying the complexity of gender and sexual diversity politics on the continent. This book is a must-read for anyone interested in LGBT rights and activism.'
Ashley Currier, author of Politicizing Sex in Contemporary Africa and Out in Africa

`This book provides a gripping portrait of queer life in West Africa, and an intimate insight into the resilience, courage and creativity of those who are marginalized, not only by societal norms of gender and sexuality, but also by global narratives of LGBT rights.'
Adriaan Van Klinken, Associate Professor of Religion and African Studies, University of Leeds

'Robbie is a meticulous researcher with an unparalleled knowledge of LGBT rights in Africa, a deep connection with local activists, and an understanding of the complex relationship between well-intended outside human rights groups and the local activist community.'
Corinne Dufka, Human Rights Watch, Associate Director, West Africa

Robbie Corey-Boulet has worked for over a decade as a journalist, primarily in West Africa and Southeast Asia. He reported for several years for the West Africa bureau of the Associated Press, and his writing has been published by outlets including The Atlantic, Guernica, World Policy Journal and The Guardian. He has also worked in Liberia as a media trainer for the NGO Journalists for Human Rights. He is currently the senior editor of World Politics Review and is based in Brooklyn, New

GOR010027676
Love Falls On Us: A Story of American Ideas and African LGBT Lives by Robbie Corey-Boulet
Robbie Corey-Boulet
Used - Like New
Hardback
Zed Books Ltd
2019-07-02
336
1786997088
9781786997081
N/A
Book picture is for illustrative purposes only, actual binding, cover or edition may vary.
This is a used book - there is no escaping the fact it has been read by someone else and it will show signs of wear and previous use. Overall we expect it to be in very good condition, but if you are not entirely satisfied please get in touch with us.