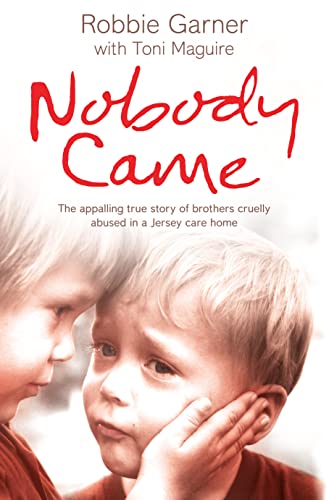 Nobody Came
by Robbie Garner

Nobody Came: The appalling true story of brothers cruelly abused in a Jersey care home by Robbie Garner

Robbie was born in Jersey fifty six years ago. When he was five his mother placed him and his three siblings in care. They were collected from their home by the police. It was the same day that the children had witnessed their father's suicide attempt by hanging. The children were separated; Robbie and his younger brother were taken to The Sacre Coeur, an orphanage for children under twelve, while their elder brother was placed in Haut de la Garenne. Their baby sister disappeared. The boys never saw her again.

Robbie and his three year old brother were bewildered and frightened by their surroundings. Their world as they had known it had disintegrated in just a matter of a few hours. They had sobbed as their eldest brother was taken away from them; they had never been apart before.

Sacre Coeur, run by nuns, was a place where unimaginable abuse was committed against defenceless small children. The nuns gave them no explanation. Just gave them their scratchy uniforms and showed them their dormitory. They had joined the tribe of lost boys; the ones who no one cared about.

The two boys were eventually transferred to Haut de la Garenne, a place where sick twisted minds had devised even more tortuous methods of sexually abusing the helpless.

There were suicides there. One boy blew himself up by creeping into a bunker with a supply of butane gas. And of course there were the children who simply disappeared. Gone somewhere better Robbie was told. After all in a children's home there was a lot of coming and going.

Today Robbie holds down a full time job and looks after his brother who he has loved and cared for since they were those little frightened boys. He wonders what happened to his friends who disappeared.

Robbie Garner was born in Jersey in the 1950s. After his father tragically comitted suicide he and his three siblings were sent to live in children's homes. Having spent twenty years in London, Toni Maguire now lives in Norfolk. She is the author of the No. 1 bestseller Don't Tell Mummy and top 10 bestseller When Daddy Comes Home.

GOR001429867
Nobody Came: The appalling true story of brothers cruelly abused in a Jersey care home by Robbie Garner
Robbie Garner
Used - Very Good
Paperback
HarperCollins Publishers
2009-01-12
320
000728795X
9780007287956
N/A
Book picture is for illustrative purposes only, actual binding, cover or edition may vary.
This is a used book - there is no escaping the fact it has been read by someone else and it will show signs of wear and previous use. Overall we expect it to be in very good condition, but if you are not entirely satisfied please get in touch with us.