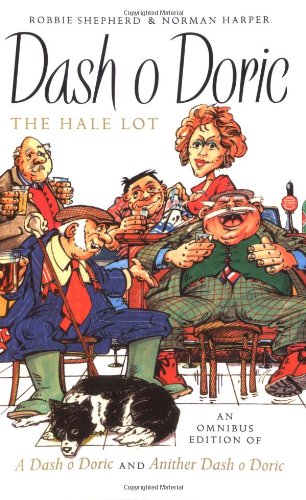 Used Price
16,49 $
inc. GST
Free Shipping in Australia
The humour and dialect of the North-east forms a unique blend. In this book, packed with anecdotes and stories covering childhood, work, love and marriage, the kirk and the school, Robbie Shepherd and Norman Harper provide a tour of the wit and wisdom of the North-east of Scotland.
Very Good Good

When Sir Harry Lauder left a concert on Deeside he was mystified that his kokes had not got the response received elsewhere. It perked him up when, from the spilling audience, he heard a voice say, 'Fit a gran comic. It took me aa ma time nae ti lach.' The Humour of the North-east is found at less celebrated levels too. There is the tale of the middle-aged couple who had courted each other for almost thirty years, but had never got round to marriage. One day Jock decided to voice his thoughts on the matter, for he was worried that people were speaking about their phenomenally long relationship. 'Jean,' Is it nae time the twao's were thinkin' aboot getting mairrit?' 'Behave yersel, Jock,' said Jean. 'Fa wid hae ony o's noo?' The humour and dialect of the North-east forms a unique and hilarious blend. In this book, packed with anecdotes and stories covering childhood, work, love and marriage, the kirk, the school, old age and several others, Robbie Shepherd and Norman Harper provide a fascinating tour of the wit and wisdom of the North-east of Scotland.
This book, the third in the series, presents the best of the two previous volumes - A Dash o' Doric and Anither Dash o' Doric - as well as a whole range of new material, making it the best introduction to the wit and wisdom of the North-east of Scotland available.

GOR001470416
Dash O'Doric: The Hale Lot by Robbie Shepherd
Robbie Shepherd
Used - Very Good
Paperback
Birlinn General
2007-08-07
126
1841582506
9781841582504
N/A
Book picture is for illustrative purposes only, actual binding, cover or edition may vary.
This is a used book - there is no escaping the fact it has been read by someone else and it will show signs of wear and previous use. Overall we expect it to be in very good condition, but if you are not entirely satisfied please get in touch with us.