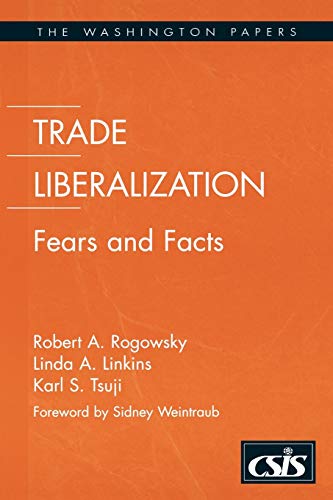 Trade Liberalization by Robert A. Rogowsky

After briefly summarizing the concerns in trade liberalization, the authors review the economic and legal literature. Statements by advocates appear alongside discussions of economic or legal analysis of the same issue, highlighting the divergence of views.

Trade Liberalization: Fears and Facts by Robert A. Rogowsky

Examining the often-expressed concerns about trade liberalization, the authors assess both the facts and common perceptions underlying the issues. Research shows that some popular concerns about trade are factually based, but others are less well supported or arise from apparent misunderstandings of the way international markets work. This form of presentation both highlights the current divergence of views and demonstrates the extent to which either new research or better public dissemination of existing research might lead toward greater consensus.

The authors examine seven often-expressed concerns about trade liberalization to assess both the facts and common perceptions underlying the issues.

* The threat to sovereignty

* Trade's effect on the environment

After briefly summarizing the concerns raised in each area, the authors review a large body of recent economic and legal literature. Plain statements by advocates of a particular position on an issue appear alongside discussion of more formal economic or legal analysis of the same issue. This form of presentation both highlights the current divergence of views and demonstrates the extent to which either new research or better public dissemination of existing research might lead toward greater consensus.

ROBERT A. ROGOWSKY is director of operations at the U.S. International Trade Commision (USITC) and adjunct professor of international trade at George Mason University's School of Public Policy. From 1995 to 1999, he served also as chief economist and acting director of USITC's Office of Economics. Dr. Rogowsky received his Ph.D. in economics from the University of Virginia (1982). He is a Japan Society Fellow. He has written widely on international trade, competition policy and regulation, including Relevant Markets in Antitrust, edited with Kenneth Elzinga, and The Political Economy of Deregulation, edited with Bruce Yandle.

LINDA A. LINKINS is the assistant to the director of operations at the U.S. International Trade Commission, a position she has held since 1998. Earlier she served as an economist in USITC's Office of Economics and as an industry analyst in its Office of Industries. Dr. Linkins received her Ph.D. in economics from American University in 1997. She has contributed to numerous USITC research studies and has published research on quantifying the effects of the Multi-fiber Arrangement, international trade and the environment, and the competitiveness of the U.S. pharmaceutical industry.

KARL S. TSUJI is an international trade analyst with the U.S. International Trade Commission, where he assesses industry and trade trends for certain long-rolled steel products, various base-metal manufactures, aluminum, and precious metals. He has also participated in interagency panels and forums on a wide range of topics related to the metals industry, including environmental, energy, manufacturing technology, and trade issues. He holds Ph.D. and M.S. degrees in mineral economics and an M.S. degree in economic geology, all from The University of Arizona.

Foreword by Sidney Weintraub Preface Introduction Trade's Effect on Manufacturing Wages, Income Inequality, and Labor Standards Trade Deficits Exposure to International Economic and Financial Shocks Trade, Economic Growth, and the Environment Sovereignty Issues Protecting Public Health and Safety Appendix: Trade Deficit Math Bibliography Index
NLS9780275974022
9780275974022
0275974022
Trade Liberalization: Fears and Facts by Robert A. Rogowsky
Robert A. Rogowsky
New
Paperback
ABC-CLIO
2001-05-30
128
N/A
Book picture is for illustrative purposes only, actual binding, cover or edition may vary.
This is a new book - be the first to read this copy. With untouched pages and a perfect binding, your brand new copy is ready to be opened for the first time
Trustpilot