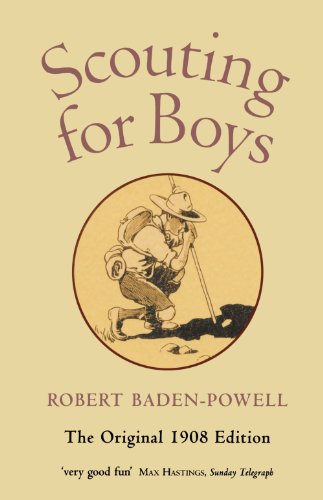 Scouting for Boys
by Robert Baden-Powell

In Stock
$11.49
+10% GST
'Scouting for Boys' (1908) is both a handbook and a philosophy for a way of living that replaces self with service, puts country before individual, and duty above all. It also details how to light fires, stalk men and animals. This edition reveals its maverick complexity, exploring its contradictions about sexuality, the environment and the empire.
Very Good Good Well Read
10 in stock

Scouting for Boys: A Handbook for Instruction in Good Citizenship by Robert Baden-Powell

'A trained scout will see little signs and tracks, he puts them together in his mind and quickly reads a meaning from them such as an untrained man would never arrive at.' A startling amalgam of Zulu war-cry and imperial and urban myth, of borrowed tips on health and hygiene, and object lessons in woodcraft, Robert Baden-Powell's Scouting for Boys (1908) is the original blueprint and 'self-instructor' of the Boy Scout Movement. An all-time bestseller in the English-speaking world, second only to the Bible, this primer of 'yarns and pictures' constitutes probably the most influential manual for youth ever published. Yet the book is at the same time a roughly composed hodge-podge of jingoist lore and tracker legend, padded with lengthy quotations from adventure fiction and B-P's own autobiography, and seamed through with the multiple anxieties of its time: fears of degeneration, concerns about masculinity and self-restraint, invasion paranoia. Elleke Boehmer's edition of Scouting for Boys is the first to reprint the original text and illustrations, and her fine introduction investigates a book that has been cited as an authority by militarists and pacifists, capitalists and environmentalists alike.

'very good fun' * Max Hastings, Sunday Telegraph *
'Elleke Boehmer's erudite introduction makes you wish she would get around to writing a full-length biogaphy of the first Chief Scout' * William Cook, New Statesman *
'a gem of a contemporary source' * Living History *
'the value of Elleke Boehmer's well-annotated text of the original edition is to show us the anxieties, contradictions and excitements of the Boy Scout movement at its inception' * Alan Hollinghurst, Guardian *
'a gripping read' * The Oldie *

Elleke Boehmer is Hildred Carlile Professor in English at Royal Holloway, University of London. She is the author of many books and articles on postcolonial writing and theory. She has also written short stories and three novels, most recently Bloodlines.

GOR001416577
Scouting for Boys: A Handbook for Instruction in Good Citizenship by Robert Baden-Powell
Robert Baden-Powell
Oxford World's Classics Hardback Collection
Used - Very Good
Paperback
Oxford University Press
2005-02-10
448
0192802461
9780192802460
N/A
Book picture is for illustrative purposes only, actual binding, cover or edition may vary.
This is a used book - there is no escaping the fact it has been read by someone else and it will show signs of wear and previous use. Overall we expect it to be in very good condition, but if you are not entirely satisfied please get in touch with us.