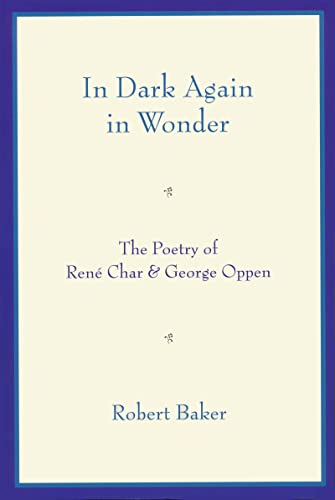 In Dark Again in Wonder by Robert Baker

In Dark Again in Wonder: The Poetry of Rene Char and George Oppen by Robert Baker

At the center of In Dark Again in Wonder are readings of Rene Char (1907-88) and George Oppen (1908-84). Both of these poets achieved recognition at a young age, Char among the French surrealists in the 1930s, Oppen among the American objectivists in the same decade. Both were independent individuals who, having found their way to communities of inventive writers, stepped back and shaped their own idiosyncratic paths. Both responded decisively to the social upheavals of the 1930s and '40s. Oppen committed himself to radical politics in the '30s, a decision that, as it turned out, led to his not writing poetry for nearly twenty-five years. Char fought in the Resistance in the '40s. Both, in their mature work, developed a kind of poetry that is at once a love poetry, a meditative poetry, and a poetry of encounter.The concluding chapter of the book places the questions raised by Char's and Oppen's work in a larger context, tracing the cultural history that shapes our modern experience of inhabiting a tension between an historical and a metaphysical horizon of experience, or, as this appears in a different but related light, a tension between a sociological and an existential understanding of our lives. Char and Oppen are both poets concerned with the old philosophical questions that are still with us-the nature of spiritual freedom, the gathering of the self in relation to death, the meditation on the whole, the turn to Nature as the open space of the whole under the conditions of modernity, the clarification of the ground of vision in eros and love, and the search for the good life-while at the same time they fully engage the social predicaments and promises of their world.
. . . I have hardly ever come across a book that was more packed with insight into the vital and contentious topic of the relevance of poetry to political and social life. -- Heythrop Journal
Baker has written a comprehensive study of how modernist European and American poetry continues to internalize philosophical oppositions by looking beyond the discrete outputs of the two poets it names in its title. In this sense, it will be of equal interest to anyone concerned with Char's oeuvre, Oppen's work, or with the intellectual history of Western religion, philosophy, and art in the twentieth century. -- Modern Language Review
. . . Baker shows readers that each poet, especially as he grew older, participated in that larger philosophical search for an account of the mystery of the whole in which individual lives unfold: Where am I? Who am I? How should I live my life? In the modern West, these questions have been answered from a political, historicist, or sociological perspective and from a Romantic, phenomenological, or existentialist perspective, and both Oppen and Char wrestled with the tension between those perspectives. -- Choice
A brilliant, philosophical, and aesthetic approach to twentieth-century poetry that casts important light on the great poetic works of Rene Char and George Oppen. Revealing the ongoing role of wonder in the post-Romantic tradition, it points to two remarkable poets whose work embodies imagination in the knowledge of inevitable loss, renewal in the awareness of despair. This is a book worth reading for its insight into two poets and the larger literary and philosophical currents in which they lived and worked. -- Sandra L. Bermann, Princeton University
Robert Baker has written a fine and unusual book: a study of two remarkable poets, one French and the other American, and a concluding reflection of considerable literary and intellectual reach on the gap between history and metaphysics in which both poets found themselves and in which we still subsist. Baker's style is synthetic, magisterial, drawing on a capacious knowledge of literature and the history of ideas. -- Kevin Hart, University of Virginia
This is a brilliant, erudite, beautifully written, and compelling book, one that makes an important contribution to our understanding not only of the two poets on whom it focuses but of the period they inhabit and that we, as their inheritors, continue to inhabit. Robert Baker wears his considerable learning lightly, but he has deep knowledge both of the history of European and American poetry and of the history of philosophy. He has thought deeply and passionately about poetry, philosophy, history, and the ways in which they intertwine. -- Henry Weinfield, University of Notre Dame
Robert Baker is associate professor of English at the University of Montana.
NLS9780268022297
9780268022297
0268022291
In Dark Again in Wonder: The Poetry of Rene Char and George Oppen by Robert Baker
Robert Baker
New
Paperback
University of Notre Dame Press
20120315
256
N/A
Book picture is for illustrative purposes only, actual binding, cover or edition may vary.
This is a new book - be the first to read this copy. With untouched pages and a perfect binding, your brand new copy is ready to be opened for the first time
Trustpilot