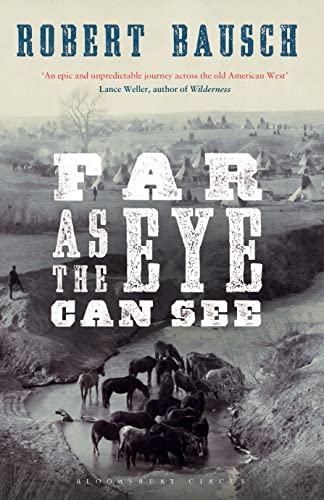 Far as the Eye Can See
by Robert Bausch

Far as the Eye Can See Summary

Far as the Eye Can See by Robert Bausch

A Union veteran several times over, Bobby Hale has repeatedly deserted and re-enlisted under different names to earn the enlistment bonus. After the civil war, he sets his heart on California, but only makes it as far as Montana. Now after shooting the wrong people he has to evade not only the US Army but also the native population. Against the growing conflict of the Great Sioux War, Bobby is travelling across the harsh horizon to make it back to Eveline, a poker-playing wagon owner who has taught him that he does not have to spend his life alone. Within miles of the woman he believes can save him, Hale's trigger finger lands him in trouble again, changing the course of his journey and setting him on a heart-stopping adventure across the Great Plains. Across ten years and thousands of hard-won miles, Bobby comes to understand the wilderness through those he encounters: the pioneers on the wagon trail who follow the glittering promise of gold; a Crow Brave who shows him meaning of real freedom and strength; and the militia men, still carrying the scars of the recent war, whose hatred of "Injuns" is even stronger than their fear. Far as the Eye Can See is the story of life in a place where every minute is an engagement in a kind of war of survival, and of how two people in the midst of such majesty and violence can manage to find a pathway to their own humanity.

Customer Reviews - Far as the Eye Can See

Far as the Eye Can See Reviews

An epic and unpredictable journey across the old American West * Lance Weller, author of Wilderness *
Great contemporary Western novels are thin on the ground by Robert Bausch's Far As The Eye Can See feels like an instant classic ... It's a morally complex story of redemption and a reminder that life is never as simple as you'd like it to be. And, by kings, the central love story is a really doozy * Metro *
An ambitious and intelligent modern Western that's concerned far more with the human soul than genre tropes * Glasgow Herald *

Robert Bausch is the author of seven novels and one collection of short stories. They include Almighty Me (optioned for film and eventually adapted as Bruce Almighty), A Hole in the Earth (a New York Times Notable and Washington Post Favourite Book of the Year) and Out of Season (also a Washington Post Favourite). He was born in Georgia and is Professor of English at Northern Virginia Community College. In 2005, he won the Fellowship of Southern Writers' Hillsdale Award for Fiction for his body of work. In 2009, he was awarded the John Dos Passos Prize for Literature, also for sustained achievement. He has twice been a finalist for the Pulitzer Prize. He lives in Virginia. www.robertbausch.org

GOR006447128
Far as the Eye Can See by Robert Bausch
Robert Bausch
Used - Very Good
Paperback
Bloomsbury Publishing PLC
2014-12-04
320
1408844303
9781408844304
N/A
Book picture is for illustrative purposes only, actual binding, cover or edition may vary.
This is a used book - there is no escaping the fact it has been read by someone else and it will show signs of wear and previous use. Overall we expect it to be in very good condition, but if you are not entirely satisfied please get in touch with us.