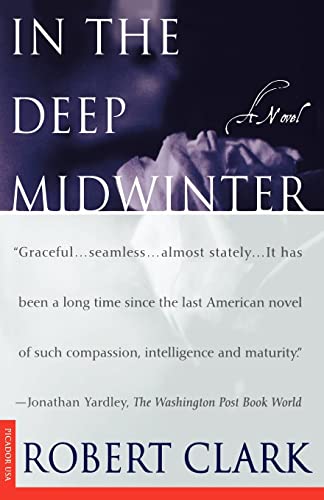 In the Deep Winter
by Robert Clark-Picador

In the Deep Winter Summary

In the Deep Winter by Robert Clark-Picador

In November of 1949, Richard MacEwan, a well-established lawyer in St. Paul, Minnesota, loses his brother James in what seems to have been a hunting accident. As he seeks to understand the events of the day his brother died, Richard finds the calm surface of his life disturbed when secrets kept by the women in his family begin to emerge. Among his bachelor brother's papers, Richard discovers a letter from his wife, Sarah, that hints at an infidelity. Shaken and confused, he finds himself tempted by an attractive woman who had known his brother. And when Richard's daughter, Anna, vulnerable after her recent divorce, becomes involved with a married man, Charles Norden, her affair changes her life and shakes the very foundation of the MacEwan family. The lives of these four characters - and the troubling legacy of James - are rendered in luminous detail and quietly breathtaking prose. A first novel that is "old-fashioned" in the most satisfying ways, In the Deep Midwinter presents a family and a world in crisis, a transformation as mysterious as winter becoming spring.

In the Deep Winter Reviews

"The most absorbing, most intelligent and most wholly satisfying novel I've read in a good while--certainly since Richard Ford's Pulitzer-winning Independence Day . . . A beautiful and haunting novel of character." --Don Fry, Seattle Times

"In The Deep Midwinter comes along at a time when people have stopped talking about The Great American Novel. That's too bad, because this just might be it." --Kate Tuttle, The Boston Book Review

"Robert Clark . . . has an ear for dialogue that's pitch perfect and an impeccable eye for detail . . . A moving and provocative novel, In the Deep Midwinter marks a fine debut." --Ruth Coughlin, The New York Times Book Review

"Clark unfolds the story's moral dramas with rare assurance and grownup charity . . . In the Deep Midwinter not only shows how love can lead to suffering, but also, more interestingly, points out how suffering can lead to love." --Pico Iyer, Time

Robert Clark is the author of a biography of James Beard, The Solace of Food, and a cultural history of the Columbia River, River of the West (Picador). He lives in Seattle, Washington.

GOR003234046
In the Deep Winter by Robert Clark-Picador
Robert Clark-Picador
Used - Very Good
Paperback
St Martin's Press
1998-04-23
288
0312181140
9780312181147
N/A
Book picture is for illustrative purposes only, actual binding, cover or edition may vary.
This is a used book - there is no escaping the fact it has been read by someone else and it will show signs of wear and previous use. Overall we expect it to be in very good condition, but if you are not entirely satisfied please get in touch with us.