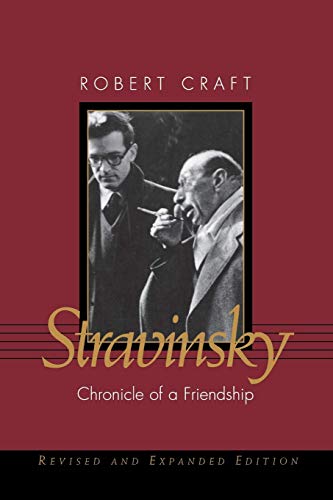 Stravinsky: Chronicle of a Friendship by Robert Craft

The standard biographical source for the last decades of Stravinsky's life and a unique trove of primary material on twentieth-century cultural and intellectual history, now again available, in expanded form.

For nearly the last twenty-five years of Igor Stravinsky's incredibly full life, the noted musician, conductor, and writer Robert Craft was his closest colleague and friend, a trusted member of his household, and an important part of all of the composer's activities. Throughout these years, Craft kept a detailed diary, impressive in its powers of observation and characterization. That diary forms the basis for Stravinsky: Chronicle of a Friendship, now released in a substantially revised and expanded new edition.

This edition includes nearly twice as many illustrations and more than 35% entirely new textual material. In addition, Craft adds an evocative "Postlude" in which he summarily brings matters forward to the death of Vera Stravinsky, several years after that of the Maestro.

[One of] the best books of 1994...hours of witty, civilized entertainment.
--Washington Post|Craft proves again that he is not only compassionate and sometimes wickedly funny, but the most readable and intelligent living writer on music.
--The New Republic|The ideal chronicler of Stravinsky's life, times and ideas.
--New York Times Book Review|. . . [provides] entree to a magical world of artistic figures and exotic places. . . . The sketches are intimate, the anecdotes about 'I.S.' irresistible, the endless travels full of delectable detail.
--Publishers Weekly

GOR004342368
Stravinsky: Chronicle of a Friendship by Robert Craft
Robert Craft
Used - Very Good
Paperback
Vanderbilt University Press
1997-01-15
608
0826512852
9780826512857
N/A
Book picture is for illustrative purposes only, actual binding, cover or edition may vary.
This is a used book - there is no escaping the fact it has been read by someone else and it will show signs of wear and previous use. Overall we expect it to be in very good condition, but if you are not entirely satisfied please get in touch with us.