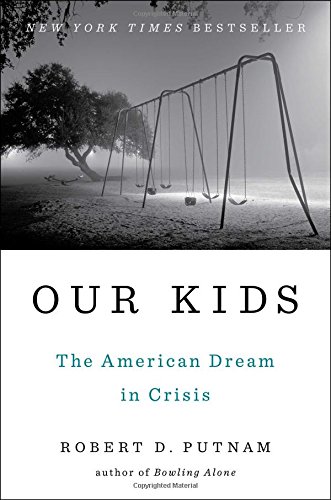 Our Kids
by Robert D. Putnam

Our Kids: The American Dream in Crisis by Robert D. Putnam

It's the American dream: get a good education, work hard, buy a house, and achieve prosperity and success. This is the America we believe in-a nation of opportunity, constrained only by ability and effort. But during the last twenty-five years we have seen a disturbing "opportunity gap" emerge. Americans have always believed in equality of opportunity, the idea that all kids, regardless of their family background, should have a decent chance to improve their lot in life. Now, this central tenet of the American dream seems no longer true or at the least, much less true than it was.

Robert Putnam-about whom The Economist said, "his scholarship is wide-ranging, his intelligence luminous, his tone modest, his prose unpretentious and frequently funny"-offers a personal but also authoritative look at this new American crisis. Putnam begins with his high school class of 1959 in Port Clinton, Ohio. By and large the vast majority of those students-"our kids"-went on to lives better than those of their parents. But their children and grandchildren have had harder lives amid diminishing prospects. Putnam tells the tale of lessening opportunity through poignant life stories of rich and poor kids from cities and suburbs across the country, drawing on a formidable body of research done especially for this book.

Our Kids is a rare combination of individual testimony and rigorous evidence. Putnam provides a disturbing account of the American dream that should initiate a deep examination of the future of our country.

"Robert D. Putnam is technically a Harvard social scientist, but a better description might be poet laureate of civil society. In Our Kids, Putnam brings his talent for launching a high-level discussion to a timely topic. . . . No one can finish Our Kids and feel complacent about equal opportunity." -- Jason DeParle * The New York Times Book Review *
"Putman's new book is an eye-opener. When serious political candidates maintain that there are no classes in America, Putnam shows us the reality - and it is anything but reassuring." -- Alan Wolfe * Washington Post Book World *
"Much of the current debate about inequality has a strangely abstract quality, focusing on the excesses of the 1 per cent without really coming to terms with what has happened to the American middle class over the past two generations. Into this void steps the political scientist Robert Putnam, with a truly masterful volume that should shock Americans into confronting what has happened to their society." -- Francis Fukuyama * The Financial Times *
"Robert D. Putnam vividly captures a dynamic change in American society-the widening class-based opportunity gap among young people. The diminishing life chances of lower-class families and the expanding resources of the upper-class are contrasted in sharp relief in Our Kids, which also includes compelling suggestions of what we as a nation should do about this trend. Putnam's new book is a must-read for all Americans concerned about the future of our children." -- William Julius Wilson, Lewis P. and Linda L. Geyser University Professor, Harvard University
"Robert Putnam weaves together scholarship and storytelling to paint a truly troubling picture of our country and its future. Our Kids makes it absolutely clear that we need to put aside our political bickering and fix how this country provides opportunity for its millions of poor children. This book should be required reading for every policymaker in America, if not every American." -- Geoffrey Canada, President, the Harlem Children's Zone
"In yet another path-breaking book about America's changing social landscape, Robert Putnam investigates how growing income gaps have shaped our children so differently. His conclusion is chilling: social mobility `seems poised to plunge in the years ahead, shattering the American dream.' Must reading from the White House to your house." -- David Gergen
"With clarity and compassion, Robert Putnam tells the story of the great social issue of our time: the growing gap between the lives of rich and poor children, and the diminishing prospects of children born into disadvantage. A profoundly important book and a powerful reminder that we can and must do better." -- Paul Tough, author of How Children Succeed: Grit, Curiosity, and the Hidden Power of Character
"The book's chief and authoritative contribution is its careful presentation for a popular audience of important work on the erosion, in the past half century, of so many forms of social, economic, and political support for families, schools, and communities. . . . Our Kids is a passionate, urgent book." -- Jill Lepore * The New Yorker *
"A thoughtful and persuasive book." * The Economist *
"The irony of the book is contained in its title: The love for `our kids' is driving the destruction of the collective possibilities of other people's kids. . . . Incredibly useful, essential reading." -- Stephen Marche * Esquire *
"Putnam writes clear, impassioned, accessible prose. . . . [He] has made a real contribution in calling our attention to a situation of profoundly divergent experiences for different classes that Americans ought to find morally unacceptable, as he obviously does." -- Nicholas Lemann * The New York Review of Books *
"Charles Dickens used his literary genius to compel his contemporaries to face up to the poverty and violence which afflicted the poor in Victorian England, and Robert Putnam does the same in his newest book, which analyzes `The American Dream in Crisis' not in social science lingo, but through the direct experience of a group of young Americans also struggling with poverty and violence. Our Kids shows that we are living in a two-tier social and economic world where the affluent succeed through education and economic opportunity, and the poor struggle unavailingly to rise out of their poverty. The compelling results of Putnam's research are inescapable. Read this book and discover a new America." -- Jill Ker Conway
"Highly readable. . . . An insightful book that paints a disturbing picture of the collapse of the working class and the growth of an upper class that seems to be largely unaware of the other's precarious existence." * Kirkus Reviews (starred review) *

Robert D. Putnam is the Professor of International Peace at Harvard University. He is the authour of six previous books, and his articles have appeared in THE NEW YORK TIMES, THE WASHINGTON POST, THE AMERICAN PROSPECT as well as many other publications.

GOR006776522
Our Kids: The American Dream in Crisis by Robert D. Putnam
Robert D. Putnam
Used - Very Good
Hardback
Simon & Schuster
2015-04-09
400
1476769893
9781476769899
N/A
Book picture is for illustrative purposes only, actual binding, cover or edition may vary.
This is a used book - there is no escaping the fact it has been read by someone else and it will show signs of wear and previous use. Overall we expect it to be in very good condition, but if you are not entirely satisfied please get in touch with us.