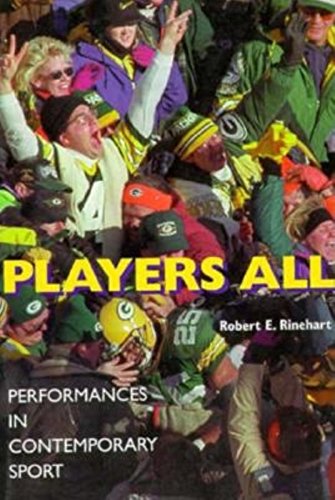 Players All
by Robert E. Rinehart

Out of Stock
$41.99
inc. GST
Introduces sports tourism and the highly commercialized world of global sport. This book explores the world of contemporary sport performances, from the Olympic Games to The eXtreme Games, the Super Bowl to 'The American Gladiators'. It shows how sports have become theatrical events, staged for an audience that is sometimes international in size.
Very Good
Only 0 left

Players All: Performances in Contemporary Sport by Robert E. Rinehart

Once upon a time, sport was a contest between two individuals or teams, watched perhaps by a few people for their amusement or instruction. Soon the spectators came to be a necessary part of the activity. Today sports events have become more like spectacles designed for audience participation. Even players seem caught up in a performance in which athletic competition plays only a part. Nostalgia for a purer age of competition seems only to feed the hunger to discover new ways to join in the sports experience. Fans, athletes, coaches, merchants and manufacturers, collectors and wannabes - we've become players all.In a book that is both scholarly and engagingly personal, Robert E. Rinehart takes us into the world of contemporary sport performances, from the Olympic Games to 'The eXtreme Games', the Super Bowl to 'The American Gladiators'. He introduces us to sports tourism and the highly commercialized world of global sport.He analyzes the emergence of such 'sports' as paint ball (with its associations to the Vietnam War) and indoor rock climbing (and its links to environmentalism and self-mastery). He shows how sports have become theatrical events, staged for an audience that is sometimes national, even international in size. Rather than agonistic drama, Rinehart likens current sport - especially the new trash sports with their explicit audience participation - to performance art. Yet he finds that even the most hallowed of traditional sports are influenced by the new culture. A playfully intellectual - or intellectually playful - romp on the playing fields of contemporary athletic competition, this book paints a revealing portrait of the new postmodern culture of sports. "Drama and Performance Studies" series - Timothy J. Wiles, editor.

Written for an advanced, knowledgeable, sociologist audience, this critique of sport and games may be a difficult read for many people. Using the language of postmodernism, with its attitude of superiority, Rinehart seeks to show that in contemporary sport contests the audience and media are also players. He advances the thesis of sport as an avant--garde metaphor rather than sport as drama, providing observational evidence to support his claim. Rinehart draws on interviews, observations, and academic background as an independent scholar in his investigation of contests as varied as American Gladiators, paint ball, the Super Bowl, and the eXtreme Games. This is a slow moving and less than playful look, through the lens of postmodernism, at today's sport scene. Graduate students, faculty, and researcherD. M. Furst, San Jose State University, 1999dec CHOICE.

ROBERT E. RINEHART is Independent Scholar. He has taught courses in Physical Education and Dance at Idaho State. His work has appeared in Sociology of Sport Journal, Aethlon, Journal of Sport History, Journal of Sport and Social Issues, and Cultural Studies.

GOR010189981
Players All: Performances in Contemporary Sport by Robert E. Rinehart
Robert E. Rinehart
Used - Very Good
Paperback
Indiana University Press
1998-06-01
208
0253212235
9780253212238
N/A
Book picture is for illustrative purposes only, actual binding, cover or edition may vary.
This is a used book - there is no escaping the fact it has been read by someone else and it will show signs of wear and previous use. Overall we expect it to be in very good condition, but if you are not entirely satisfied please get in touch with us.