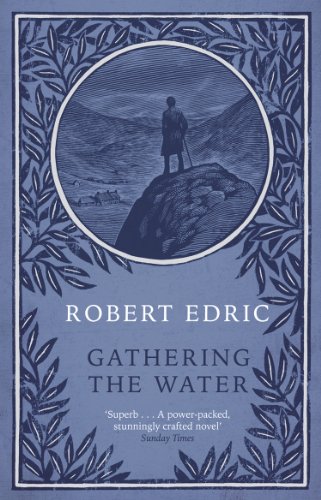 Gathering The Water
by Robert Edric

In Stock
$10.49
+10% GST
It is 1847, northern England, and Charles Weightman has been given the unenviable task of overseeing the flooding of the Forge Valley and evicting its lingering inhabitants.
Very Good
Only 2 left

Gathering The Water by Robert Edric

It is 1847, northern England, and Charles Weightman has been given the unenviable task of overseeing the flooding of the Forge Valley and evicting its lingering inhabitants. Weightman is heartily resented by these locals, and he himself is increasingly unconvinced both of the wisdom of his appointment and of the integrity and motives of the company men who posted him there. He finds some solace, however, in his enigmatic neighbour, Mary Latimer. Caring for her mad sister, Mary is also an outsider, and a companionship develops between the two of them which offers them both some comfort and support in their mutual isolation. As winter closes steadily in and as the waters begin to rise in the Forge Valley, it becomes increasingly evident that the man-made deluge cannot be avoided; not by the locals desperate to save their homes, nor by the reluctant agent of their destruction, Weightman himself. In a masterful new novel, Edric captures powerful human emotions with grace and precision. The hauntingly resonant backdrop to this story of David and Goliath marks Edric's dramatic return to historical literary fiction.

"Gathering the Water belongs with a group of his (Edric's) novels whose artistry and resonance constitute one of the most astonishing bodies of work to appear from a single author for a generation." * Daily Telegraph *
"Gathering the Water is a small novel but one that packs a mighty punch. Stylistically it is superb .....above all though, it is in his marshalling of his themes that Edric proves himself such an accomplished novelist. At one level a book about loss and guilt, loyalty and ambition, madness and reality, Gathering the Water in fact ranges even further in its concerns, contrasting the immutability of nature with the similarly crushing immutability of money and business ........a power-packed, stunningly crafted novel." * Sunday Times *
"Booker judges take note." * Guardian *
"Gathering the Water is an admirably serious novel, written in prose as spare as its setting. Its lament for the death of the community is subtle and powerful." * Daily Mail *
"A compelling story ......Robert Edric writes with a steady rhythm that, like the flow of the diverted dam waters, fills in a picture of horror and loss with a sustained and unrelenting force." * TLS *

Robert Edric was born in 1956. In his writing career, he has been a winner of the 1985 James Tait Black Prize (for Winter Garden), a runner-up for the 1986 Guardian Fiction Prize (for A New Ice Age), a runner-up for the 2001 WH Smith Literary Award (for The Book of the Heathen), and in 2002, a Booker longlister (for Peacetime). After The Song Cycle Trilogy, his critically acclaimed series of crime novels set in Hull, Gathering the Water heralds his return to historical literary fiction and was also longlisted for the 2006 Booker Prize. His latest novel, The Kingdom of Ashes, is now available from Doubleday.

GOR002659652
Gathering The Water by Robert Edric
Robert Edric
Used - Very Good
Paperback
Transworld Publishers Ltd
2007-08-01
288
0552999741
9780552999748
N/A
Book picture is for illustrative purposes only, actual binding, cover or edition may vary.
This is a used book - there is no escaping the fact it has been read by someone else and it will show signs of wear and previous use. Overall we expect it to be in very good condition, but if you are not entirely satisfied please get in touch with us.