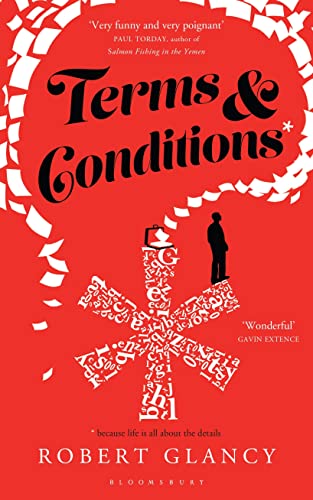 Frank has been in a car accident*. The doctor tells him he lost his spleen, but Frank believes he has lost more. He is missing memories - of those around him, of the history they share and of how he came to be in the crash. All he remembers is that he is a lawyer who specialises in small print**. In the wake of the accident Frank begins to piece together his former life - and his former self. But the picture that emerges, of his marriage, his family and the career he has devoted years to, is not necessarily a pretty one. Could it be that the terms and conditions by which Frank has been living are not entirely in his favour***? In the process of unravelling the knots into which his life has been tied, he learns that the devil really does live in the detail and that it's never too late to rewrite your own destiny. *apparently quite a serious one **words that no one ever reads *** and perhaps never have been

This tale of a lawyer losing his grip on reality is original, very funny and very poignant. Read it! * Paul Torday, author of Salmon Fishing in the Yemen *
It's wonderful. Funny, poignant, simple and profound - it's the kind of book I absolutely love. And it has the best ending I've read in a very long time * Gavin Extence, author of The Universe Versus Alex Woods *
This great debut feels fresh and playful, and exceptionally readable (footnotes have never been so addictive). It also has stuff to say about life, too, and the importance of seeing the big picture - and the small print. Every book seems to have "funny and life-affirming" written on it but this one actually is * Matt Haig, author of The Humans *
Deliciously cynical story * Independent on Sunday *
Funny * Irish Mail on Sunday *
Hilarious * Sun *
Hilarious and heartbreaking in equal measures ... It's an assured first novel; engaging, absorbing and incredibly life-affirming. Hopefully it will find the wide audience it deserves * Yorkshire Post *
Hilarious and heartbreaking * Prima *

Robert Glancy was born in Zambia and raised in Malawi. At fourteen he moved from Africa to Edinburgh then went on to study history at Cambridge. He currently lives in New Zealand with his wife and children.

GOR005811047
Terms & Conditions by Robert Glancy
Robert Glancy
Used - Very Good
Paperback
Bloomsbury Publishing PLC
2014-02-13
272
1408852217
9781408852217
N/A
Book picture is for illustrative purposes only, actual binding, cover or edition may vary.
This is a used book - there is no escaping the fact it has been read by someone else and it will show signs of wear and previous use. Overall we expect it to be in very good condition, but if you are not entirely satisfied please get in touch with us.