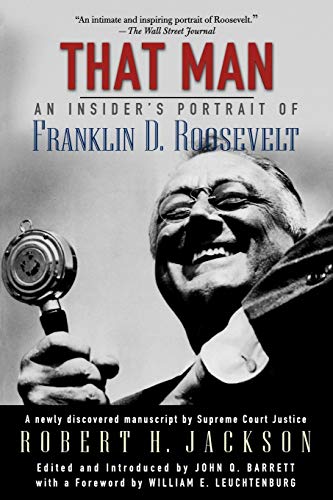 That Man
by the late Robert H. Jackson

That Man: An Insider's Portrait of Franklin D. Roosevelt by the late Robert H. Jackson

Robert H. Jackson was one of the giants of the Roosevelt era: an Attorney General, a still revered Supreme Court Justice and, not least important, one of Franklin Delano Roosevelt's close friends and advisers. His intimate memoir of FDR, written in the early 1950s before Jackson's untimely death, has remained unpublished for fifty years. Here is that newly discovered memoir. Written with skill and grace, this is truly a unique account of the personality, conduct, greatness of character, and common humanity of "that man in the White House," as outraged conservatives called FDR. Jackson simply but eloquently provides an insider's view of Roosevelt's presidency, including such crucial events as FDR's Court-packing plan, his battles with corporate America, his decision to seek a third term, and his bold move to aid Britain in 1940 with American destroyers. He also offers an intimate personal portrait of Roosevelt-on fishing trips, in late-night poker games, or approving legislation while eating breakfast in bed, where he routinely began his workday. We meet a president who is far-sighted but nimble in attacking the problems at hand; principled but flexible; charismatic and popular but unafraid to pick fights, take stands, and when necessary, make enemies. That Man is not simply a valuable historical document, but an engaging and insightful look at one of the most remarkable men in American history. In reading this memoir, we gain not only a new appreciation for Roosevelt, but also admiration for Jackson, who emerges as both a public servant of great integrity and skill and a wry, shrewd, and fair-minded observer of politics at the highest level.

Barrett has done an admirable and even heroic job, partly by interpolating some of Jackson's other writing, including unpublished materials and excerpts from an oral history, in which Jackson answered detailed questions about his life and his career. As a result, there is now a genuine book, one that contains some illuminating discussion of historical events. Most important, the book offers a fresh occasion for considering the personality and career of the greatest leader of the twentieth century, memorably described by Isaiah Berlin as the only statesman in the world upon whom 'no cloud rested.' * Cass Sunstein, New Republic *
Lively, revealing and suddenly relevant.... Jackson's memoir sheds new light * not always flattering *
The publication of this slender but meaty book is that rare and happy event: a voice speaking to us from the past, a voice we had not expected to hear and that brings the past to life as not even the best of historians can do. * Jonathan Yardley, The Washington Post *
An intimate and inspiring portrait of Roosevelt. He is seen as both charming and determined, while often elusive and enigmatic.... Understanding Franklin Roosevelt better is a constant challenge for students of history: He has been scrutinized a great deal but not often with the benefit of such a vantage point. * Wall Street Journal *
A thoughtful, fresh, useful look at FDR. With powerful respect, even awe, for the man, Jackson nevertheless insisted on seeing him in a very human way * filled with greatness, yet flawed like all of us. It's a memoir that reflects the best of Jackson: candid, honest and tellingly expressed. *
A winning memoir * the story of Jackson's life in the White House; a powerful portrait of our 32nd president; and, most of all, a tribute to the humanity and the vision that stood at the heart of the Roosevelt administration.... A unique historical find.... It contains a trove of new information about Roosevelt's life. *
That Man is a great find * the last memoir of Franklin D. Roosevelt by someone who worked with him and knew him well. Next to Oliver Wendell Holmes, Robert H. Jackson was the best writer on the Supreme Court in the 20th century, and his portrait of 'that man in the White House' is filled with astute insights and warm recollections. It is a book no fan of FDR can do without. *
Franklin D. Roosevelt was the dominant political figure of the last century. Robert H. Jackson, Supreme Court Justice, was one of the essential figures in his life. Professor John Q. Barrett, a highly qualified authority on the subject, has now brought this relationship fully to light. I urge this volume for all who would know more of what could be the greatest days of Washington. I use the term cautiously: an indispensable book. * John Kenneth Galbraith *
These superbly eloquent chapters provide intimate glimpses of Roosevelt operating on many different levels. Through Jackson's informed lens, we are shown FDR as president, politician, lawyer, commander-in-chief, administrator, populist leader and companion. Jackson's account is not only of infinite value for the new light it sheds on 'that man,' but also for unique glimpses of Harold Ickes, Tommy 'The Cork' Corcoran, Harry Hopkins and the other New Deal stalwarts. * Publishers Weekly *
Painstakingly, insightfully * even lovingly *
Intelligent, informed thoughts on FDR's presidency.... The intimate look into the way decisions were made brings Roosevelt very much into human focus. * Kirkus Review *
A long lost gem has been unearthed after a half century. Supreme Court justice Robert Jackson's first hand portrait of Franklin Delano Roosevelt is as close as we are likely to get to deciphering the enigma that was FDR. Jackson, associate and friend, confidante and poker playing pal of the President, was perceptive enough to recognize the genius and honest enough to admit the flaws beneath his subject's seductive geniality. We are further indebted to the book's editor, John Q. Barrett, for rescuing this priceless memoir from an obscurity that would have left us poorer in our understanding of America's towering 20th Century statesman. * Joseph E. Persico, author of Roosevelt's Secret War *
For those with enough time and interest in the subject to warrant going through a study of much more than a thousand pages, [Conrad] Black's biography is worth reading. But most readers, as well as professional historians, will find Justice Jackson's "insider's portrait" of Roosevelt of greater interest. * Robert S. McElvaine, Professor of History, Millsaps College, Jackson, MS, and author of The Great Depression:America, 1929-1941 *
Well worth reading...is the fascinating discovery, long after his death, of the reminiscences by Robert Jackson, FDR's Attorney General, a Supreme Court Justice, and maybe the closest friend of the president to have written about him. That Man is not only personally fascinating but of real historical interest on the subject of Lend-Lease. * Geoffrey Wheatcroft, The Spectator *

About the late Robert H. Jackson

Robert H. Jackson was Associate Justice of the Supreme Court from 1941 to his death in 1954. A major figure in American legal history, he also served as Solicitor General and Attorney General of the United States, and the American Chief Prosecutor at the Nuremberg Trial. Author of the best-selling The Nurnberg Case, he is considered by many to be the finest writer ever to sit on the Supreme Court. John Q. Barrett is Professor of Law at St. John's University in New York and Elizabeth S. Lenna Fellow at the Robert H. Jackson Center in Jamestown, New York. He formerly served in the office of Independent Counsel Lawrence Walsh investigating Iran-Contra, and in the U.S. Department of Justice. He discovered the manuscript of That Man among Jackson's papers while researching a biography of the Justice. William E. Leuchtenburg, the leading historian of Roosevelt and the New Deal, has contributed a foreword discussing Jackson's relationship with FDR.

GOR009681092
That Man: An Insider's Portrait of Franklin D. Roosevelt by the late Robert H. Jackson
the late Robert H. Jackson
Used - Very Good
Paperback
Oxford University Press Inc
2004-12-23
336
0195177576
9780195177572
Winner of A Choice Outstanding Academic Title for 2005.
Book picture is for illustrative purposes only, actual binding, cover or edition may vary.
This is a used book - there is no escaping the fact it has been read by someone else and it will show signs of wear and previous use. Overall we expect it to be in very good condition, but if you are not entirely satisfied please get in touch with us.