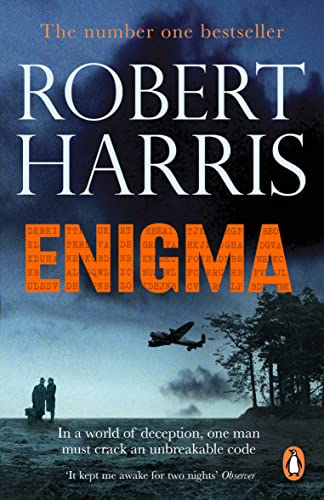 Used Price
$15.49
inc. GST
Free Shipping in Australia
Bletchley Park: the top-secret landmark of World War Two, where a group of young people were fighting to defeat Hitler, and win the war. March 1943, the Second World War hangs in the balance, and at Bletchley Park a brilliant young codebreaker is facing a double nightmare.
Very Good Good Well Read

Bletchley Park: the top-secret landmark of World War Two, where a group of young people were fighting to defeat Hitler, and win the war. March 1943, the Second World War hangs in the balance, and at Bletchley Park a brilliant young codebreaker is facing a double nightmare. The Germans have unaccountably changed their U-boat Enigma code, threatening a massive Allied defeat. And as suspicion grows that there may be a spy inside Bletchley, Jericho's girlfriend, the beautiful and mysterious Claire Romilly suddenly disappears.

"The brilliance of Enigma is that it gives readers the sense of being contemporary with its characters and then leads them on a dark journey of discovery to arrive at another of the Second World War's blackest horror stories, one not fully admitted until half a century later... Altogether top-class stuff. Peter Millar" * The Times *
"Enigma totally gripped me" * Sunday Times *
"After the resounding success of his first novel, Fatherland, the question was what would Robert Harris do for an encore? This is his resounding answer" * Mail on Sunday *
"Extraordinarily good... undoubtedly the best thriller of the year, and perhaps of several years to come" * Evening Standard *
"I finished the book regretful it had ended, and full of wonder at this extraordinary world, people and achievements it evoked" * Observer *

GOR001787729
Enigma by Robert Harris
Robert Harris
Used - Very Good
Paperback
Cornerstone
2009-10-01
464
0099527928
9780099527923
N/A
Book picture is for illustrative purposes only, actual binding, cover or edition may vary.
This is a used book - there is no escaping the fact it has been read by someone else and it will show signs of wear and previous use. Overall we expect it to be in very good condition, but if you are not entirely satisfied please get in touch with us.