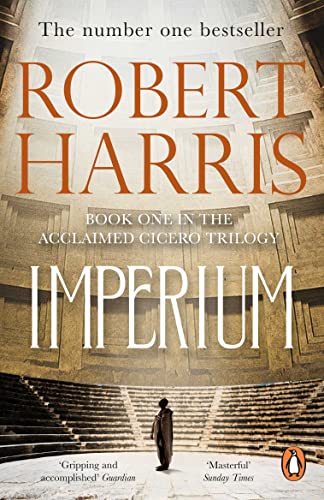 Used Price
$16.99
inc. GST
Free Shipping in Australia
Compellingly written in Tiro's voice, Imperium takes us into the violent, treacherous world of Roman politics, and the quest of one man - clever, compassionate, devious, vulnerable, and above all Roman - to reach the top.
Reviews:
Trustpilot
Very Good Good Well Read

'Masterful' Sunday Times _________________ Ancient Rome. 70 B.C. A city rippling with power - and with no shortage of men who would wield it... When Tiro, the confidential secretary of a Roman senator, opens the door to a terrified stranger on a cold November morning, he sets in motion a chain of events which will eventually propel his master into one of the most famous courtroom dramas in history. The stranger is a Sicilian, a victim of the island's corrupt Roman governor, Verres. The senator is Cicero, a brilliant young lawyer and spellbinding orator, determined to attain imperium - supreme power in the state. Compellingly written in Tiro's voice, Imperium takes us into the violent, treacherous world of Roman politics, and the quest of one man - clever, compassionate, devious, vulnerable, and above all Roman - to reach the top. _________________ A stunning novel of power and ambition from Robert Harris, the number one bestselling author of Fatherland, Enigma, Archangel and Pompeii.

"Harris's best so far, rapid and compelling in narrative, copious in detail, thoroughly researched but also, which is more important, thoroughly imagined... Irresistible" -- Allan Massie * Sunday Telegraph *
"In Harris's hands, the great game becomes a beautiful one" * The Times *
"Genres ancient and modern have rarely been so skilfully synthesised... Gripping and accomplished" -- Tom Holland * The Guardian *
"A joy to read in every way, and as a mirror to the politics of our present age has no equal" * The Independent *
"Harris deploys the devices of the thriller writer to trace the perils and triumphs of Cicero's ascent ... A finely accomplished recreation of the power struggles of more than two millenniums ago" * The Observer *

GOR001444227
Imperium: (Cicero Trilogy 1) by Robert Harris
Robert Harris
Cicero Trilogy
Used - Very Good
Paperback
Cornerstone
2009-10-01
496
0099527669
9780099527664
N/A
Book picture is for illustrative purposes only, actual binding, cover or edition may vary.
This is a used book - there is no escaping the fact it has been read by someone else and it will show signs of wear and previous use. Overall we expect it to be in very good condition, but if you are not entirely satisfied please get in touch with us.