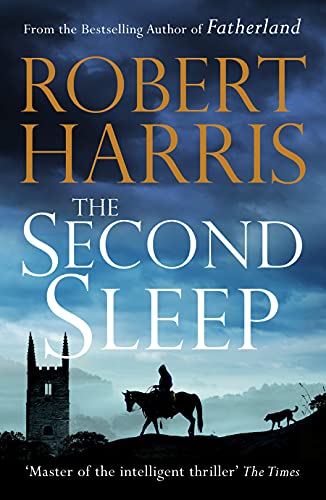 The Second Sleep
by Robert Harris

THE LATEST NOVEL FROM ROBERT HARRIS: chosen as a Book of the Year by The Times, Sunday Times, Guardian, Telegraph, Mail on Sunday, and Express

It's a crime to be out after dark, and Fairfax knows he must arrive at his destination - a remote village in the wilds of Exmoor - before night falls and curfew is imposed.

He's lost and he's becoming anxious as he slowly picks his way across a countryside strewn with the ancient artefacts of a civilisation that seems to have ended in cataclysm.

'The book's real power lies in its between-the-lines warning that our embrace of the internet represents some kind of sleepwalk into oblivion. It's a provocative, tub-thumping sci-fi of which H. G. Wells might have been proud.' DAILY MAIL

'Harris' latest work intelligently warps historical fiction and tackles issues of religion, science and the apocalypse in the process. As he flexes his imagination, you will be left pondering as often as you are page-turning.' HERALD

A thoroughly absorbing, page-turning narrative in which the author, with his customary storytelling skills, pulls us ever deeper into the imaginative world he has created. It [also] poses challenging questions about the meaning of the past, the idea of progress and the stability of civilisation. It is a fine addition to Harris's diverse body of work. * Sunday Times *
A return to the type of high-concept novel that made his name . . . [T]he writing is elegant and pacy. The characters are fleshed out and the plot zips along. * The Times *
A truly surprising future-history thriller. Fabulous, really. * Evening Standard *
Harris is rightly praised as the master of the intelligent thriller. Genuinely thrilling, wonderfully conceived and entirely without preaching, it probes the nature of history, of collective memory and forgetting, and exposes the fragility of modern civilisation. * Daily Telegraph, 5 stars ***** *
Harris's bleak imagined world issues a clarion call to the present, urging us to recognise the value of progress, the importance of woolly concepts like liberalism and the rule of law, and all the other ideals we've spent generations fighting for yet seem prepared to sacrifice on the altar of populism. For make no mistake, this novel [is] very much about the here and now . . . Harris is a master of plotting and, in elegant, understated third-person prose, he ratchets the tension ever upwards . . . this is nothing if not a page-turner. * Observer *
Reading Robert Harris's historical thrillers feels like attending a Simon Schama lecture on a roller-coaster - you come away with a new perspective on history while feeling dizzy with excitement . . . In The Second Sleep he takes us on a thrilling ride while serving up serious food for thought . . . I doubt there is a living writer who is better at simultaneously making readers' adrenaline pump while their brains whirr. * Sunday Express, 4 stars **** *
When Harris is at his best - and here he is - he writes with a skill and ingenuity that few other novelists can match. In this case, the usual page turning pleasures are joined by something else: a sense that, through his historical-futuristic setting, Harris has found a unique vantage point to comment on the present . . . This is a novel that not only makes you smile at its author's brilliance, but induces a shiver of dread at how real it all seems. * Financial Times *
With a story of forbidden love joining larger themes, this vividly imagined, brilliantly clever novel is - as you'd expect from the author of Fatherland and Archangel - an absolutely class act. * Sunday Mirror *
Harris . . . is a fearless writer. The Second Sleep races along at breakneck speed. The prose is pure, elegant, never tricky and his imagination knows no bounds. * Daily Express *
It is a strange premise for a thriller, but Robert Harris is such a wily old hand that it is a pleasure to accompany him on his time travels. * Mail on Sunday *
Harris takes you on a thrilling ride while serving up serious food for thought. * Daily Mirror *
Harris has contrived to do something rather brilliant and new. He has put us at the heart of the mystery. * Guardian *
It's a provocative, tub-thumping sci-fi of which H. G. Wells might have been proud. * Daily Mail *
As he flexes the ample muscle of his imagination, you will be left pondering as often as you are page-turning. * i paper *
Harris weaves a smart, intriguing story that cements his reputation as, in the words of the cover, 'master of the intelligent thriller'. He's that perfect combination of equally fine writer and storyteller; the narrative is satisfying and the prose is evocative. The world of The Second Sleep is plausible and richly imagined. * Irish Independent *

Robert Harris is the author of thirteen bestselling novels: the Cicero Trilogy - Imperium, Lustrum and Dictator - Fatherland, Enigma, Archangel, Pompeii, The Ghost, The Fear Index, An Officer and a Spy, which won four prizes including the Walter Scott Prize for Historical Fiction, Conclave, Munich and The Second Sleep. Several of his books have been filmed, including The Ghost, which was directed by Roman Polanski. His work has been translated into forty languages and he is a Fellow of the Royal Society of Literature. He lives in West Berkshire with his wife, Gill Hornby. His next book, V2, is coming out in autumn 2020.

GOR009996149
The Second Sleep: the Sunday Times #1 bestselling novel by Robert Harris
Robert Harris
Used - Like New
Hardback
Cornerstone
2019-09-05
336
1786331373
9781786331373
N/A
Book picture is for illustrative purposes only, actual binding, cover or edition may vary.
The book has been read, but looks new. The book cover has no visible wear, and the dust jacket is included if applicable. No missing or damaged pages, no tears, possible very minimal creasing, no underlining or highlighting of text, and no writing in the margins.