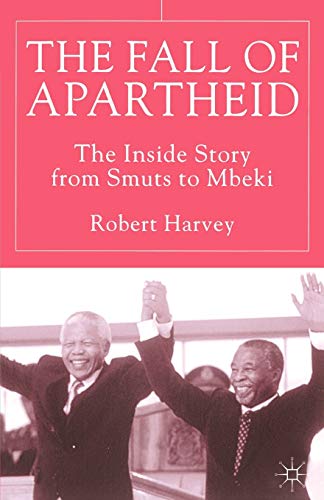 The Fall of Apartheid
by Robert Harvey

Out of Stock
$20.49
inc. GST
The Fall of Apartheid tells the extraordinary story of how apartheid came into being, secured its ascendancy over the richest and most developed society in Sub-Saharan Africa, and then collapsed.
Good
Only 0 left

The Fall of Apartheid Summary

The Fall of Apartheid: The Inside Story from Smuts to Mbeki by Robert Harvey

The Fall of Apartheid tells the extraordinary story of how apartheid came into being, secured its ascendancy over the richest and most developed society in Sub-Saharan Africa, and then collapsed. For the first time it reveals the full story of the secret meetings between Africans and Afrikaners in Britain, in which South Africa's current president, Thabo Mbeki, had a direct line to President Botha. Robert Harvey's fascinating narrative helps to illuminate not just the South African problems but also more general issues of conflict- and problem-solving.

The Fall of Apartheid Reviews

'...very interesting to read especially because of the wealth of quotations, fragments, and citations.' - Annelies Vergoolaege, H-Safrica

ROBERT HARVEY is an author and journalist and a former Member of Parliament. He was an assistant editor of The Economist and leader writer and columnist on the Daily Telegraph. His recent publications include Clive: The Rise and Fall of a British Emperor and Liberators.

Preface Introduction Prelude PART ONE: THE SELECT A Stranger in Stellenbosch A Seed of Hope The Broeders-Stormtroopers of Apartheid The Voksstaat The Mathematicians Afrikaner Darkness Afrikaner Caudillo The Rage PART TWO: TRIUMPH OF THE SOUL Romancing the Prisoner Punch, Counterpunch Most Secret Conduit The Mandela Imperative Hard Bargaining Breakthrough The Thatcher Opportunity The Fall of Botha Face to Face The De Klerk Revolution The White Collapse The Unravelling Endgame Index

GOR009686001
The Fall of Apartheid: The Inside Story from Smuts to Mbeki by Robert Harvey
Robert Harvey
Used - Good
Paperback
Palgrave USA
2001-06-08
257
1403915741
9781403915740
N/A
Book picture is for illustrative purposes only, actual binding, cover or edition may vary.
The book has been read but remains in clean condition. All pages are intact and the cover is intact. Some minor wear to the spine.