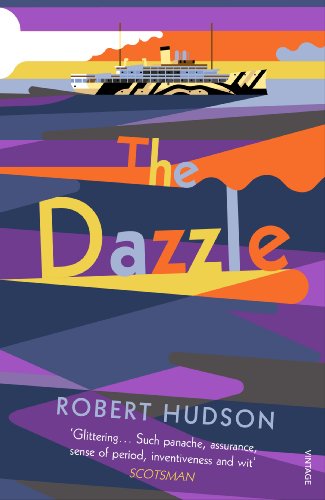 The Dazzle
by Robert Hudson

In Stock
$16.99
inc. GST
She looks like a junior sort of ocean liner but she's a very adult sort of yacht. Far offshore, on the rips and tides of the malevolent North Sea, gallant battle will be done. Just the Dazzle sitting on the edge of the world, shimmering as the sea glitters, her outline wavering.
Very Good Good Well Read
Only 3 left

The Dazzle by Robert Hudson

Scarborough, 1934. John Fastolf, rakish heir to a Dukedom, has sponsored a glamorous tunny fishing contest. He has his reasons. The young journalist Martha Gellhorn is covering the event for the London gossip papers. She has hers. And quiet little Henny Rosefield has arrived in town with Zane Grey, bestselling author and expert mountain man of the Wild West. The international craze for hunting giant tuna has swept the North Yorkshire coast, and huge yachts have transformed the harbour into something like Monte Carlo. Over them all towers the Dazzle, resplendent in jagged stripes of black, white and blue. She looks like a junior sort of ocean liner but she's a very adult sort of yacht. In the harbour, damaged dilettantes will swap beds and swap lies. Far offshore, on the rips and tides of the malevolent North Sea, gallant battle will be done. All the while, something truly dangerous is lurking. But we can't see any of that. Just the Dazzle sitting on the edge of the world, shimmering as the sea glitters, her outline wavering. Wrapped in a gripping adventure story, Robert Hudson's second novel is a deliciously witty tale of wilderness, vengeance and the death of love.

"A fantastic read, pacey and addictive, zipping along like a prize catch playing on the line of a master sportsman" -- Claire Looby * Irish Times *
"Glittering... Hudson writes with such panache, assurance, sense of period, inventiveness and wit that he brings it off. You may not, on consideration, believe a word of it, yet find yourself happily applying the adjectives Robert Macfarlane gave to Hudson's first novel: terrific...fizzy, funny, fantastical'." -- Allan Massie * Scotsman *
"Written with tremendous energy and a self-assured pizzazz: the title comes from the name of Fastolf's yacht, painted in a dazzle camouflage pattern, and it nicely catches the brilliant effect for which the book strives." * Sunday Times *
"In this rich and racy mix of a novel, centering on a high-stakes Thirties rod-off, Hudson mingles the reckless American celebrity likes of Martha Gellhorn and Zane Grey with invented Brit aristos like John Fastolf, dilettante owner of the eponymous yacht of the title. Sex, drugs and ichthyomania; Moby Dick was nothing like this." -- Wendy Holden * Daily Mail *
"The cast (both real and imagined) is alluring, the exchanges are spiked with acid, the action accelerates like a Bentley and the sex is surprisingly liberated" -- Christopher Hirst * Independent *

Robert Hudson's first novel, The Kilburn Social Club, was published by Jonathan Cape in 2009. With Marie Phillips, he writes the BBC Radio 4 series, Warhorses of Letters. He lives in London.

GOR005440733
The Dazzle by Robert Hudson
Robert Hudson
Used - Very Good
Paperback
Vintage Publishing
2014-02-06
320
0099575884
9780099575887
N/A
Book picture is for illustrative purposes only, actual binding, cover or edition may vary.
This is a used book - there is no escaping the fact it has been read by someone else and it will show signs of wear and previous use. Overall we expect it to be in very good condition, but if you are not entirely satisfied please get in touch with us.