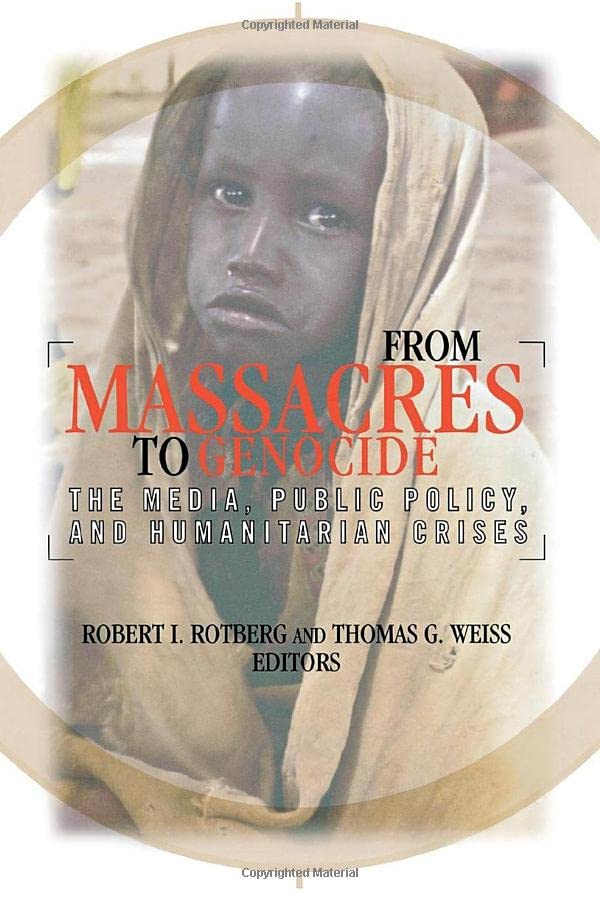 From Massacres to Genocide
by Robert I. Rotberg

From Massacres to Genocide Summary

From Massacres to Genocide: The Media, Public Policy, and Humanitarian Crises by Robert I. Rotberg

Human suffering on a large scale is a continuing threat to world peace. Several dozen gruesome civil wars disturb global order and jar our collective conscience each year. The 50 million people displaced by current complex humanitarian emergencies overwhelm the ability of the post-Cold War world to understand and cope with genocide, ethnic cleansing, massacres, and other inhumane acts. Greater public awareness of how much is at stake and how much more costly it is to act later rather than sooner can be a critical element in stemming the proliferation of these tragedies.

The media play an increasingly crucial role in publicizing humanitarian crises, and advances in technology have intensified the immediacy of their reports. Because the world is watching as events unfold, policymakers are under great pressure to respond rapidly. Close cooperation between international relief agencies and the media is thus essential to help prevent or contain the humanitarian emergencies that threaten to overwhelm the world's capacity to care and assist.

From Massacres to Genocide Reviews

"This collection spotlights the crossroads where international media, humanitarian agencies, and government officials intersect... [It] belongs in the reading file of anyone interested in this cutting edge field of American foreign policy." --Chester A. Crocker, Former Assistant Secretary of State for African Affairs

About Robert I. Rotberg

Robert I. Rotberg is director of the Program on Intrastate Conflict, Conflict Prevention, and Conflict Resolution at Harvard University's John F. Kennedy School of Government, Massachusetts, USA, and president of the World Peace Foundation. Rotberg is the author or editor of numerous books, including State Failure and State Weakness in a Time of Terror (Brookings/WPF, 2003).
Thomas G. Weiss is associate director of Brown University's Watson Institute for International Studies, Rhode Island, USA, and executive director of the Academic Council of the United Nations System, USA.

GOR007018646
From Massacres to Genocide: The Media, Public Policy, and Humanitarian Crises by Robert I. Rotberg
Robert I. Rotberg
Used - Very Good
Hardback
Brookings Institution
1996-01-01
203
0815775903
9780815775904
N/A
Book picture is for illustrative purposes only, actual binding, cover or edition may vary.
This is a used book - there is no escaping the fact it has been read by someone else and it will show signs of wear and previous use. Overall we expect it to be in very good condition, but if you are not entirely satisfied please get in touch with us.