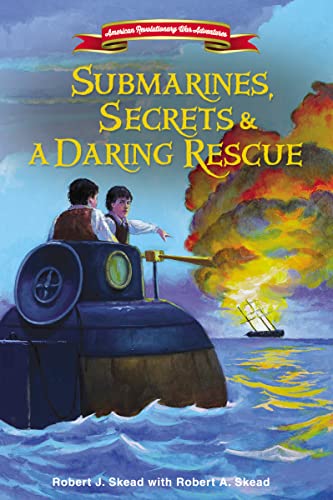 Submarines, Secrets and a Daring Rescue
by Robert J. Skead

Used Price
$29.99
inc. GST
Free Shipping in Australia
As the colonies continue their battle for independence, Ambrose and John Clark, 15-year-old twins, strike out on another secret mission during the American Revolutionary War in Submarines, Secrets, and a Daring Rescue. Join the brothers as they man a mission on one of the first submarines and bravely attempt to rescue prisoners of war.
Reviews:
Trustpilot
Very Good

Submarines, Secrets and a Daring Rescue by Robert J. Skead

In this second book in the American Revolutionary War Adventure series, Submarines, Secrets, and a Daring Rescue, twins Ambrose and John Clark find themselves volunteering for another mission to help the newly forming United States. Inspired by their success in delivering a secret message to General George Washington himself, the boys step up to help transport much-needed gunpowder to the patriots and end up in an even more dangerous situation, trying to man one of the first submarines and then, later, attempting a prison break to rescue one of their older brothers.

Follow these brave young patriots as they follow in their father's footsteps and rely on each other, their considerable courage, and God's providence for guidance and strength.

Ambrose and John Clark are back in their second Revolutionary War adventure. Fresh from delivering a top-secret message to George Washington in Patriots, Redcoats, and Spies (2015), the 14-year-old twins have now been recruited to man the American Turtle, the world's first submersible used in combat, in order to attach explosives to the hull of a British ship. Things are complicated by the fact that Loyalist spies are reporting their every move, and their older brother, Berty, is captured and scheduled to be hanged as a traitor. The story moves at a brisk pace with plenty of musketry and bloodshed, and the technical information about the Turtle's creation is interesting rather than dull; readers hearing of the submarine for the first time will be intrigued. Discussion questions, a list of the historical characters who appear in the series, a glossary, and reproductions of historical letters support the story and make this a novel that could easily be incorporated into a classroom or homeschool lesson. --- Kara Dean * Booklist *

GOR010864692
Submarines, Secrets and a Daring Rescue by Robert J. Skead
Robert J. Skead
American Revolutionary War Adventures
Used - Very Good
Hardback
Zondervan
2015-08-04
208
0310747473
9780310747475
N/A
Book picture is for illustrative purposes only, actual binding, cover or edition may vary.
This is a used book - there is no escaping the fact it has been read by someone else and it will show signs of wear and previous use. Overall we expect it to be in very good condition, but if you are not entirely satisfied please get in touch with us.