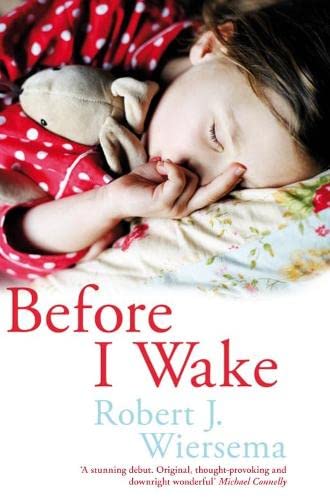 Before I Wake
by Robert J. Wiersema

Before I Wake Summary

Before I Wake by Robert J. Wiersema

Tragedy can strike at any time. In a single moment of distraction, in one instant's miscalculation.

One gorgeous spring day, three-year-old Sherry Barrett is injured in a hit-and-run accident. Her devastated parents, Simon and Karen, wait by her bedside, hoping for a miracle. Told that she will never recover, they agree to remove her from life support. And then the miracle occurs. Sherry doesn't die. But neither does she wake.

Meanwhile, Henry Denton, who was driving the truck that nearly killed Sherry, attempts suicide. Unable to die, he finds himself in a place of darkness, somewhere between this world and the next. Haunted by his own guilt, Henry struggles to understand this limbo, and what he must do to free himself.

Under the pressure of caring for their child, Simon and Karen's marriage is pushed to the point of collapse. And then pushed even further by the undeniable fact that their little girl, trapped in her living death, has become a healer.

'The kind of storytelling instincts that make you care about the answer to the one question that really counts: What happens next?' Andrew Pyper

Before I Wake Reviews

"[An] intriguing supernatural thriller in which a sudden tragedy befalls a family and strange, wondrous events take place in its wake . . ."--"Seattle"" Post-Intelligencer""Wiersema provides a deep thriller that will keep his audience wondering until the revelatory final confrontation." --"The Midwest Book Review""Wiersema threads the supernatural throughout a novel grounded in domestic conflict and tragedy . . Intriguing." --"NY Daily News""An intelligent, contemplative supernatural thriller replete with well-rounded characters, artless dialogue and a plot that, while imbued with the unexplained, develops organically, revealing its secrets at just the right pace . . . an engrossing story of flawed but genuinely good people who must bear up under the stress of loss, betrayal, unwarranted miracles and unconventional spiritual warfare . . . an engaging, emotionally resonant read." --"Publisher's Weekly" ""Before I Wake" is a stunning debut. Robert Wiersema's novel is original, thought-provoking and downright wonderful." --Michael Connelly, "New York"" Times" #1 bestselling author of "The Closers" "Riveting. . . grips the reader in a chokehold on page one and doesn't let go until the very last line. . . . Wiersema's story is utterly fearless, right to the very end. It never shies away or backs down from its questioning of faith, theology, morality and mystery. . . a unique, spellbinding, and ultimately uplifting gem." --"The Globe and Mail" """"Before I Wake" provocatively dances along the lines between faith and science, life and death." --Andrew Pyper, author of "Lost Girls" and "The Wildfire Season"

Robert J. Wiersema is a bookseller and reviewer, who contributes regularly to the Vancouver Sun, the Globe and Mail, the Ottawa Citizen and numerous other newspapers. Wiersema is also the event coordinator for Bolen Books. He lives in Victoria, B.C., with his wife and son.

GOR000467593
Before I Wake by Robert J. Wiersema
Robert J. Wiersema
Used - Very Good
Paperback
Pan Macmillan
2008-03-07
320
0330452223
9780330452229
N/A
Book picture is for illustrative purposes only, actual binding, cover or edition may vary.
This is a used book - there is no escaping the fact it has been read by someone else and it will show signs of wear and previous use. Overall we expect it to be in very good condition, but if you are not entirely satisfied please get in touch with us.