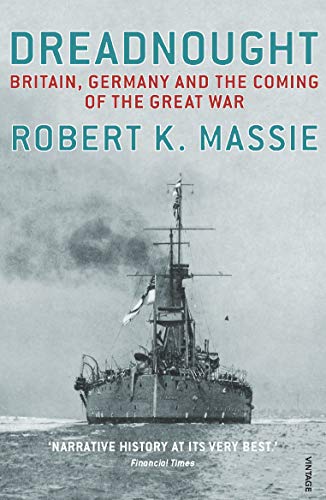 In Stock
$17.49
+10% GST
A gripping chronicle of the personal and political rivalries from the birth of Queen Victoria to the unification of Germany during the decades leading up to WW1 from Pulitzer Prize winner Robert K.
Very Good Good
Only 4 left

Dreadnought: Britain,Germany and the Coming of the Great War by Robert K. Massie

A gripping chronicle of the personal and political rivalries from the birth of Queen Victoria to the unification of Germany during the decades leading up to WW1 from Pulitzer Prize winner Robert K. Massie 2018 marks the centenary of the end of the First World War. How did it all begin? With the biographer's rare genius for expressing the essence of extraordinary lives, Massie brings to life a crowd of glittering figures: the young, ambitious Winston Churchill; the ruthless, sycophantic Chancellor Bernhard von Bulow; Britain's greatest twentieth-century Foreign Secretary, Sir Edward Grey; and Jacky Fisher, the eccentric admiral who revolutionised the British Navy and brought forth the battleship, H.M.S. Dreadnought. Their story, and the story of the era, filled with misunderstanding and tensions, missed opportunities, and events leading to unintended conclusions, unfolds like a Greek tragedy in this powerful narrative. Intimately human and dramatic, Dreadnought is history at its most riveting. `History at its best, a fantastic mix of anecdote, observation and intelligent thinking' Dan Snow, Daily Express

"History at its best, a fantastic mix of anecdote, observation and intelligent thinking" -- Dan Snow * Daily Express *
"Massie tells the story with controlled energy and attention to detail, especially human detail. It has not been told so well before." * Literary Review *
"He has the supreme gift of making history live in simple, readable language." * Observer *
"Inheritor of Barbara Tuchman's mantle as the English-speaking world's pre-eminent popular historian...Robert K. Massie has now turned his attention to the arms race between Britain and Germany c.1890-1914, the most important precipitant towards the outbreak of the First World War." -- Frank McLynn
"This is a book you are bound to enjoy. The set pieces - the naval review of June 1897, the Jameson Raid, The Kaiser's visit to Windsor, Winston Churchill visiting the fleet, "the spring of the panther" - are dramatically recreated. The pen portraits of the political and naval establishments of Wilhelmine Germany and Victorian and Edwardian Britain are brilliantly evoked with a sharp eye for the memorable detail...Massie keeps his complex story under tight control...Monographers like myself can only envy the sheer sweep of Dreadnought and the author's rich palette of colours so deftly applied. Like Barbara Tuchman's Guns of August this is narrative history at its very best. Financial Times" * Financial Times *

Robert K. Massie is the Pulitzer Prize-winning author of Peter the Great, Nicholas and Alexandra, Dreadnought and The Romanovs: The Final Chapter. He lives in Irvington, New York

GOR001953350
Dreadnought: Britain,Germany and the Coming of the Great War by Robert K. Massie
Robert K. Massie
Used - Very Good
Paperback
Vintage Publishing
2007-12-13
1040
0099524023
9780099524021
N/A
Book picture is for illustrative purposes only, actual binding, cover or edition may vary.
This is a used book - there is no escaping the fact it has been read by someone else and it will show signs of wear and previous use. Overall we expect it to be in very good condition, but if you are not entirely satisfied please get in touch with us.