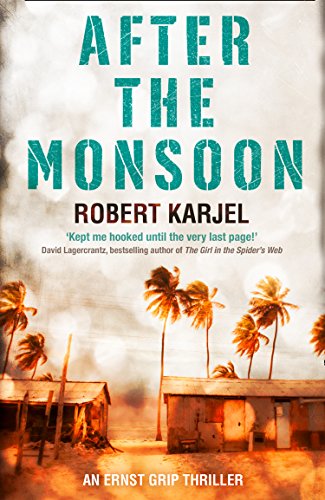 After the Monsoon
by Robert Karjel

After the Monsoon Summary

After the Monsoon by Robert Karjel

A mysterious death...
A Swedish army lieutenant drops dead on a shooting range in the African desert. Tragic accident? Or murder? Agent Ernst Grip is sent to uncover the truth.

A family in danger...
At the same time, Somali pirates kidnap a wealthy Swedish family. Why is no one back home willing to pay the ransom to save these innocent lives?

A world where no one can be trusted...
As Grip investigates, he is drawn deep into a web of intrigue, greed and double dealings. And soon he is forced to wonder - in a world where friends become enemies in the blink of an eye, how is it possible for anyone to survive?

Customer Reviews - After the Monsoon

After the Monsoon Reviews

`Robert Karjel's After the Monsoon is both Nordic noir and international thriller. The compelling characters and the suspense he creates kept me hooked until the very last page!' David Lagercrantz, bestselling author of The Girl in the Spider's Web

`An intriguing, satisfying thriller ... a subtle, gripping plot. What makes this thriller stand out is that it is not Nordic noir. There are no gloomy landscapes and melancholy silences. In their place is rapid-fire action, and a serpentine story that bursts off the page like a brush fire' Daily Mail

`Filled with rich characterization and unforeseeable twists and revelations, this mesmerizing first in a planned series will leave readers gasping for breath' Publishers Weekly

`This is exactly how a thriller should feel, and Robert Karjel constructs it with a fencer's elegance: one suspects nothing of the underlying effort. But what makes Robert Karjel extraordinary is his language - the style itself, his pointed observations. Karjel is a subtle observer' Dagens Nyheter

`The oppressing heat and exotic locations around the world bring a different type of noir: where no one feels safe, yet become a pawn in a game of those with money, power and obsessions' Crime Review

`Everything winds together nicely here, using plenty of action and pace, and just enough real-life reflections as well as "what if" scenarios to keep the reader on the edge of their seat, and, as is less often the case in thrillers, wondering about the greyness of right and wrong' Aust Crime Fiction

Robert Karjel was a lieutenant colonel in the Swedish Air Force for twenty-five years. His job as a helicopter pilot took him all over the world, from peacekeeping missions in Afghanistan to pirate hunting in Somalia, and he is the only Swedish pilot who has trained with the US Marine Corps and flown its attack helicopters. He is the author of My Name is N, his first novel to be published in English, and is one of the most sought-after motivational speakers in Sweden. He lives with his family outside of Stockholm.

GOR009686252
After the Monsoon by Robert Karjel
Robert Karjel
Used - Very Good
Paperback
HarperCollins Publishers
2018-07-12
416
0007586086
9780007586080
N/A
Book picture is for illustrative purposes only, actual binding, cover or edition may vary.
This is a used book - there is no escaping the fact it has been read by someone else and it will show signs of wear and previous use. Overall we expect it to be in very good condition, but if you are not entirely satisfied please get in touch with us.